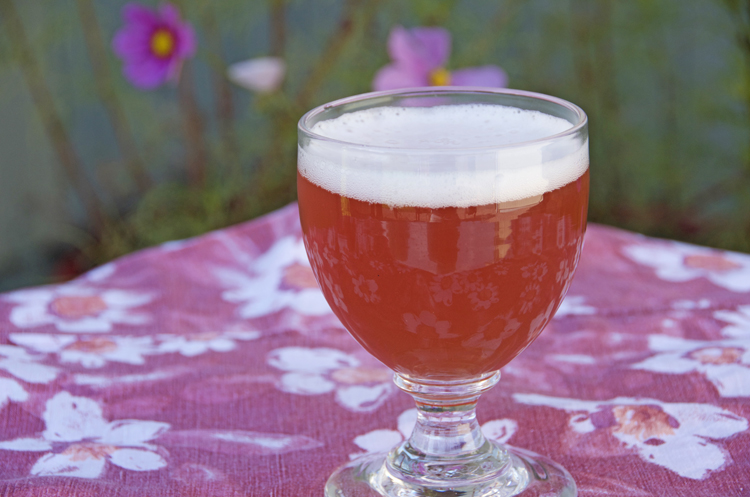 2016 is a big year for German beer. It marks the 500th anniversary of the German Purity Law for Beer (Deutsches Reinheitsgebot für Bier) which established that only water, hops, malt and yeast and no artificial ingredients, enzymes or preservatives may be used in beer-brewing. For a quick, fun intro, I recommend the video 500 Years in 50 Seconds by the German Brewers Association (in English).

So why am I writing about beer only now? No, I have not been waiting around for Oktoberfest. The truth is – and to all serious German beer connoisseurs, I understand if you prefer not to read on – I have never really liked beer back in Germany and only started drinking it after I moved to America.

Homebrewed German beer made by Bill. To read his story, “Finding German Food Through Love”, click on the image.

Maybe my dislike started growing up in Frankfurt. We lived just a few minutes up the hill from the Henninger Brewery in the Sachsenhäuser Berg neighborhood. Depending on how the wind blew, the brewery smell was intense. Heading to school down the hill towards downtown Sachsenhausen brought not much relief, as there was yet another Brewery, Binding Brauerei, on the way that released malodorous steam through its chimneys.

The beer my father drank came in rounded bottles, “construction worker bottles” (Bauarbeiterflaschen) in German slang, not the sleek taller bottles that most German breweries use today. The Henninger Brauerei, which was founded in 1655, was the first brewery in Germany to offer beer in cans in 1951, to meet the demand from American GIs. In the US, beer in cans had only been introduced in 1935 so that was a pretty progressive move.

The Henninger Brewery was also famous for two other things: Henninger Turm, a 140-meter (460-foot) grain storage silo with a rotating restaurant at the top, and the annual cycling race on May 1, which is the German Labor Day. All of this is history now. Henninger is part of a larger brewing conglomerate, and the race has been renamed and takes place elsewhere in Frankfurt. The Henninger Turm, whose lights I could see from my room every night was, in all its post-war architectural ugliness, the landmark of my childhood. The tower was demolished in 2013 and is currently being transformed into luxury apartments to become one of the tallest residential high-rises in Germany.

With the exception of Radler, the popular mix of beer and lemon soda, at a beer garden in Munich I do no recall ever drinking beer when I was still living in Germany. In Frankfurt, I always preferred apple wine (see my previous blog post) or wine. 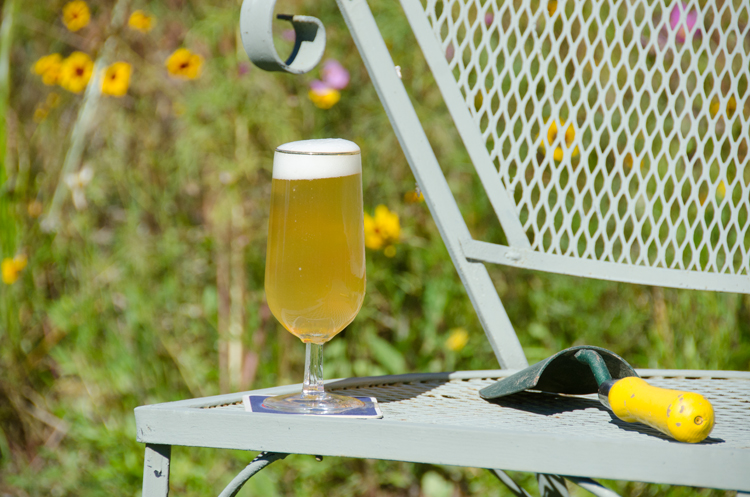 But like so many other things, this all changed when I moved to the United States, and, more specifically, when I started gardening. After a long exhausting day of digging up the soil and pulling weeds, nothing is better than sitting on a bench in your muddy, sweaty clothing, drinking a beer and admiring your day’s work. Except, I do not drink my beer straight. Our grown son scoffs and calls it “girlie beer” when he sees me adding a dash of syrup, lemonade or homemade lemon soda to beer.

So here you have it: I am a native of a beer superpower and I drink girlie beer. And I am shameless in terms of what I add to it. I do not shy away from odd concoctions. This spring I made violet syrup from The Art of Jams, Jellies and other Sweet Preserves by Linda Ziedrich, and rhubarb syrup inspired by a recipe from Marisa McClellans latest book, Naturally Sweet Food in Jars. Both syrups make very tasty seasonal beer mixes.

Mixing beer is not that un-German after all. Inspired by the English Shandy, and fueled by anglophile trends in large cities, especially in the cities of the Hanseatic League like Hamburg, the first beer mixes popped up in the early 20th century. This was also the era when Sunday outings (Sonntagsausflüge) to the countryside became popular for city folks.

Today there are dozens of different beer mixes in Germany, including many regional ones. Here are my three favorites:

Berliner Weisse is a tart, fruity, highly effervescent and refreshing wheat beer. Its origins go back to the early 16th century when Berlin brewer Cord Brohan returned from a stint in Hamburg and tried to recreate a beer that was fashionable there at the time. He did not quite get it right but other brewers in Berlin picked up the formula and over time it developed into the beer that it is today. The name Berliner Weisse falls under the EU Protected Geographical Indication, which means that only beer brewed in Berlin and surroundings may be sold under that name.

You can find imported Berliner Weisse at well-assorted beer stores in the United States. An increasing number of small breweries in the US also offer Weisse-style beers today.

Radler was, like other famous foods, invented out of an emergency. On a hot summer day in 1922, a large number of bikers stopped at a popular inn outside of Munich. The supply of beer was getting short, but lemon soda was still available in large quantities. The ingenious innkeeper mixed half beer and half lemon soda and named it Radler (Biker). I make my own soda from homemade lemon syrup and seltzer water, which contains much less sugar than commercial soft drinks.

Alsterwasser is the north German equivalent of Radler. It is named after the Alster River in Hamburg.

Russ’nmaß is a variation of Radler, a mix of lemon soda and wheat beer. It is said to have originated in the tumultuous fall of 1918 during the short-lived attempt to establish a communist republic in Bavaria after World War I. The leaders of the movement who, in reference to their Bolshevik counterparts in Russia, were called Russn, had their favorite beer joint. Whether they drank the beer mix to keep a clear head for the tasks ahead, or whether beer was running short is unclear.

Until 1993, it was the restaurants, pubs or beer gardens that did the beer mixing themselves. Then the law was changed and breweries were allowed to sell bottled mixes. Since then all types of combinations appeared on the market, including Berliner Weisse with elderflower, highly recommended by the way, or beer with Coca-Cola called Diesel in some regions, or Schmutz (Dirt) in others. Beer with Coke, that’s where I draw my taste line.

Beer mixes have also popped up in the United States. Leinenkugel, a Wisconsin-based brewery founded by a German immigrant in 1867, started the trend by offering its first Radler-style beer called Summer Shandy in 2007. It is the company’s best-selling Shandy but others have been added, and the offerings change according to the season. For example, right now you can get a Shandy flavored with pumpkin spice.

Beer was also called “liquid bread” in German (flüssiges Brot) because for the monks and nuns, who were expert brewers, it replaced the foods that were forbidden to eat during Lent.

Girlie beer is really nothing else than liquid cookies.