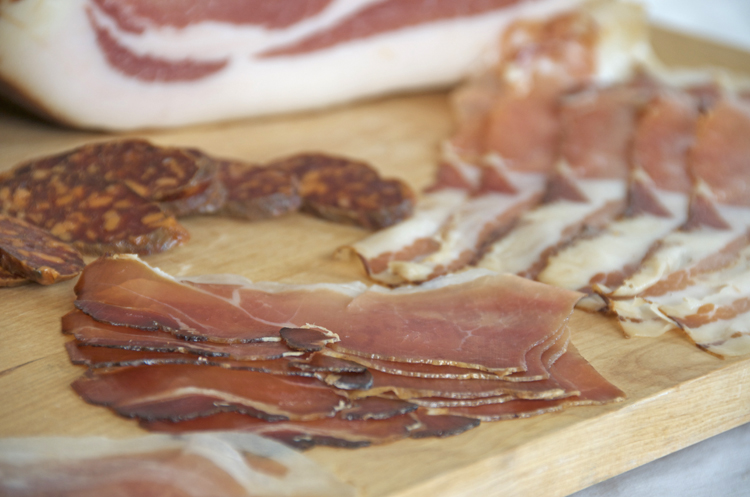 The story of Michelle and Bill is the reverse of the saying, “The way to a man’s heart is through his stomach.” Through Michelle, Bill not only discovered German food and learned to love it. He also got into making it himself. And by making I do not mean cooking. In his free time, Bill, a police officer, brews beer, cures meats, makes bratwurst, sauerkraut and more.

A few days ago, Michelle and Bill visited us, the trunk of their car filled with goodies. Over a fabulous German lunch with homemade bratwurst, potato salad, cucumber salad, samples of Bill’s cured meats, and beer, they talked about how Bill fell in love with German food and drink through Michelle’s German heritage and family. 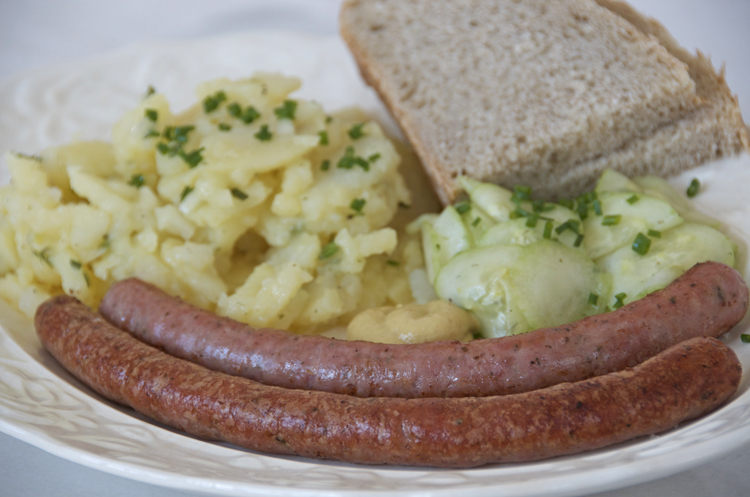 BILL. It was on our first trip to Germany in 2002 that I drank my first properly draught German lager beer. I was floored – I had never tasted beer like that before. Back in the United States, I started treasure-hunting for beer from Germany. I was like one of those obsessed collectors who drive for hours to acquire a certain tiny object. But I always came home disappointed. The German beer I found often had been stored improperly, or for too long. That’s when I started brewing my own German beers. 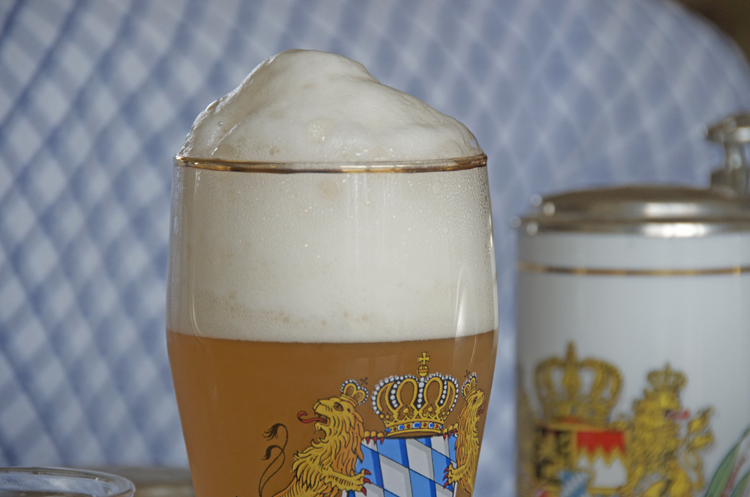 MICHELLE. I remember when Bill made his first Hefeweizen beer. I was upstairs watching TV and he brought me a glass. I started laughing because I knew exactly what was coming. When Bill gets serious about something, he immerses himself deeply to get it right. I knew that before long, we would have all the necessary equipment in the house.

BILL. I was not totally new to the topic when I started brewing beer. I knew about fermentation from winemaking. My family is Italian-American and has always made their own wine and cured their own meats. I think that’s why I felt so much at home when I first visited Michelle’s family.

MICHELLE. Yes, although our backgrounds are different – my mother is from Germany and my father is from Croatia – Bill and I had common experiences. We met in high school and often joked between us, “I cannot go out this weekend, I have meat-cutting duty.” 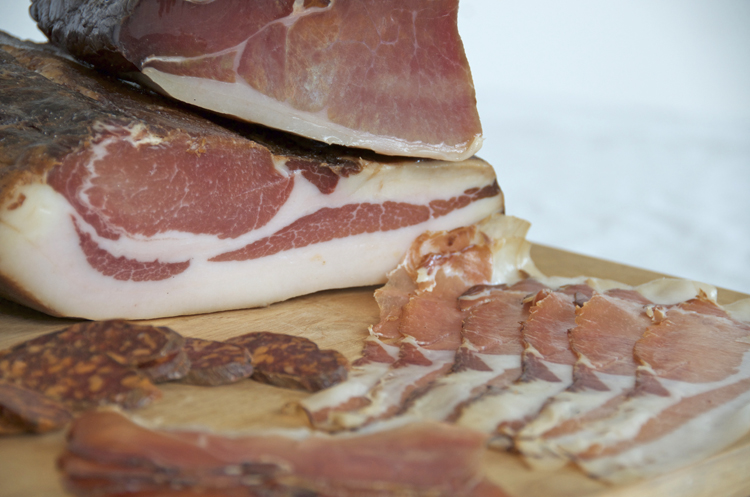 BILL. It was part of who we are.

MICHELLE. The times when I felt actually out of place as a kid was at friends’ houses where dinner often consisted of processed foods. I was used to meals being made from scratch and with fresh ingredients.

BILL. Looking back I think the summers we each spent in our parents’ respective home countries, Germany and Italy, contributed to Michelle and me being rooted so much in our ancestors’ food traditions. And, old photos as kids prove it, we both wore sandals with socks – another thing we had in common!

MICHELLE. I have many fond memories of vacations spent in Germany as a kid. One of them is being sent to the bakery by bike to pick up fresh buns. My aunt would always give me some extra money for my favorite pastry. Bill and I go to Germany almost every year. I showed him where I picked berries and collected mushrooms in the woods. I love how Bill connects with my family there. He has learned German and knows a lot of the dialect and slang words. I remember my late great-uncle watching him. He did not say much but I could tell he approved of Bill.

BILL. A key food moment was when we visited Michelle’s godparents near Bayreuth in Bavaria. They served us a plate of cured meats and I was hooked. As an Italian I had had an ongoing love affair with cured meats and was already making my own. 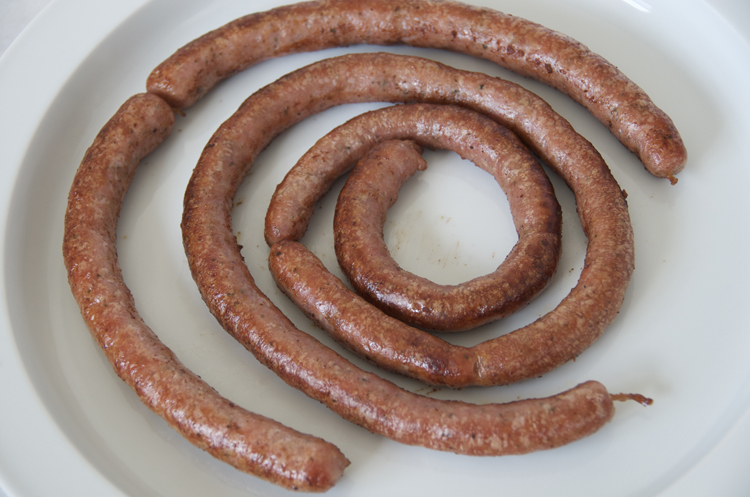 MICHELLE. After that trip, I told Bill he might as well try his hand at German cured meats. The first improvised meat smoker in which Bill did his cold-smoking was a wardrobe box. And pretty soon he started chasing down farmers for good meat.

BILL. To make German Schinkenspeck, Bauernspeck and other cured meats, I had to learn a lot about smoking processes. Sure, my father cured meats, mostly by air-drying, but all by feel. I have a more scientific approach. Of course it’s much easier nowadays to research information and trade advice and exchange experiences with others. I feel like I have taken meat-curing in my family to the next level. And at the same time I have embraced a new culture. For me, one of the highlights of our trips to Germany is to spend hours at the Deutsches Museum in Munich. And then have a proper Bavarian Brotzeit afterwards.

MICHELLE. Once you have eaten the real German stuff you cannot go back. It irks me that most of what is labeled German food in the United States is not authentic, and simply not good. No wonder German food has such a bad rap. That’s why we make our own. 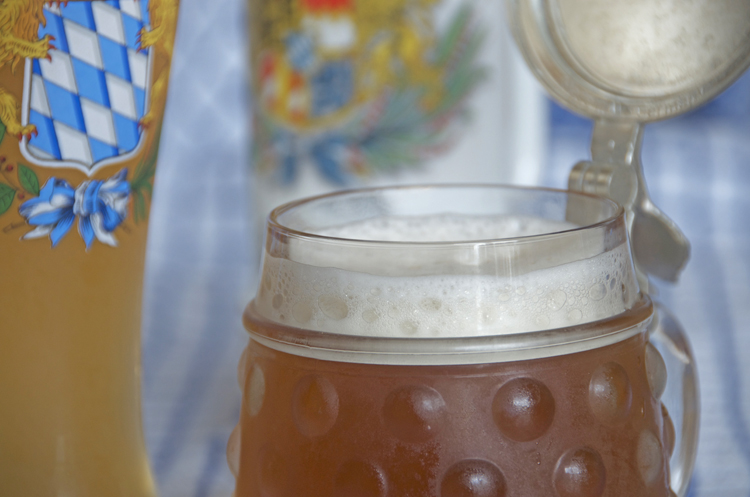 It was a delight listening to Michelle and Bill speak so passionately about German food and drink. It confirmed my own views that I have written about both in my book, Spoonfuls of Germany, and on this blog: that the real thing is delicious yet frequently misunderstood and underrated – and that German cuisine opens a window to Germany that goes far beyond the food.

One thought on “Finding German food through love”