The Prologue to The German-Jewish Cookbook describes how Stephen Rossmer, the father and grandfather of the mother-and-daughter team of authors, Gabrielle Rossmer Gropman and Sonya Gropman, bought a black radish at the farmers’ market in Bamberg, a type of radish not available in the United States at the time. It was his first visit back to his hometown in 34 years after he had fled Germany for the United States in 1939 with his wife and toddler, while his parents had perished in the Holocaust. “He peeled the black skin with his pocketknife, revealing the white interior, and sliced it into thin disks. He sprinkled each disk with salt and handed a piece to each of us. (…) It seemed as though this humble vegetable had enormous meaning for him, a memory of food deeply connected to his longing for the lost treasures of the past.”

This made me realize that against better knowledge I had only associated Jewish life in prewar Germany with the big cities further north, like Frankfurt and Berlin. Places like the synagogue in Frankfurt’s Westend neighborhood, where my parents lived when I was born, and the feudal Livingston Stables, aka Rothschild Horse Stables, next to my mother’s office were familiar landmarks during my childhood. However, I would not have associated something as typically Bavarian as a thinly sliced black radish eaten during the savory snack Brotzeit, as a food reference for German Jews. Yet it’s a fact that Jews had settled in Bamberg in the early eleventh century, just like they had in cities all along the Main and the Danube.

It was only one of the misconceptions that this remarkable book set straight for me. Reading it feels like peeling an onion to get to the core, and naturally shedding a few tears in the process. 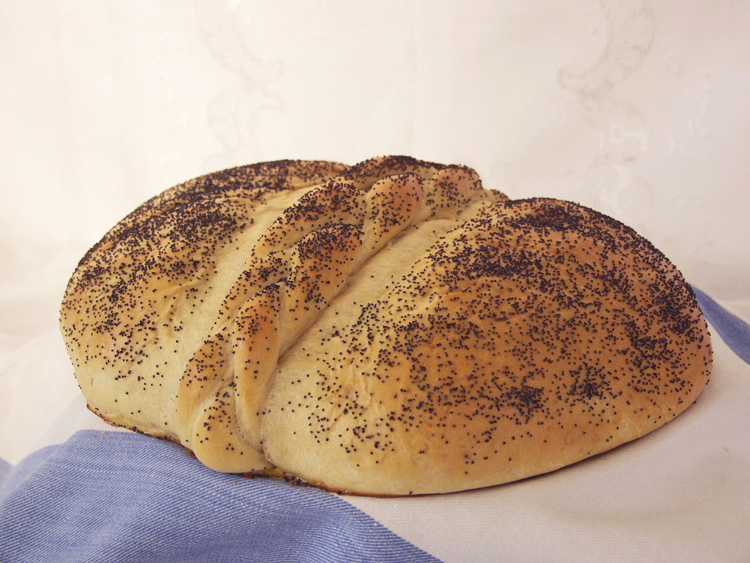 My other big misconception was that there is no distinct German-Jewish cuisine because of the high degree of assimilation of German Jews, as I had myself assumed in a previous blog post. True, most of the dishes in The German-Jewish Cookbook sound very familiar. However, it’s a wrong conclusion that German-Jewish cuisine is not a cuisine in its own right. Gabrielle and Sonya finally told the full story.

And it is as much a book for reading as it is a cookbook. It provides the historic background of German-Jewish cuisine as well as telling the family story – how the Rossheimers and Westheimers were assimilated and prospered as business owners in early twentieth-century southern Germany and were persecuted when the Nazis came to power in 1933. They managed to either leave Germany like Stephen and his young family, or perished, like his parents, family members and neighbors. Gabrielle and Sonya interviewed several of the survivors and witnesses for their book. That generation is almost gone, which makes you appreciate even more that the authors have devoted a good portion of the book to these stories.

The authors are walking a fine here line because almost in each one of the personal accounts, there is persecution, death, devastation, exile and heartbreak lurking around the corner. Emmy Zink, a woman born in 1925 in Schweinfurt whose parents worked for the Schelers, a Jewish family, talks in detail about her mother fattening geese for the kosher household. Inevitably, Emmy’s account leads up to the Kristallnacht pogrom of November 1938 and the later deportation of Frau Scheler but the authors manage those difficult transitions gracefully.

Another aspect of German-Jewish food history that the book covers is the story of German Jews in Washington Heights, a neighborhood at the northern tip of New York City, where the refugees continued their culinary traditions from Germany. This is all the more important because it is, sadly, now also a chapter of the past.

I have a Jewish friend in New York City who was born in the last year of World War II and grew up in Washington Heights, and she had told me how the more than 20,000 Jewish refugees from Germany and Austria had shaped the neighborhood with their shops. It was wonderful to read in more detail about landmark stores like the Bloch & Falk butcher shop. The rye bread from Stuhmer’s bakery in Brooklyn, which Gabrielle’s mother bought at the kosher grocery store, had a paper label baked into the crust. That’s the way almost all the breads were sold when I grew up. This is still done by some bakeries in Germany today but I have never seen a bread with baked-in paper label in America. 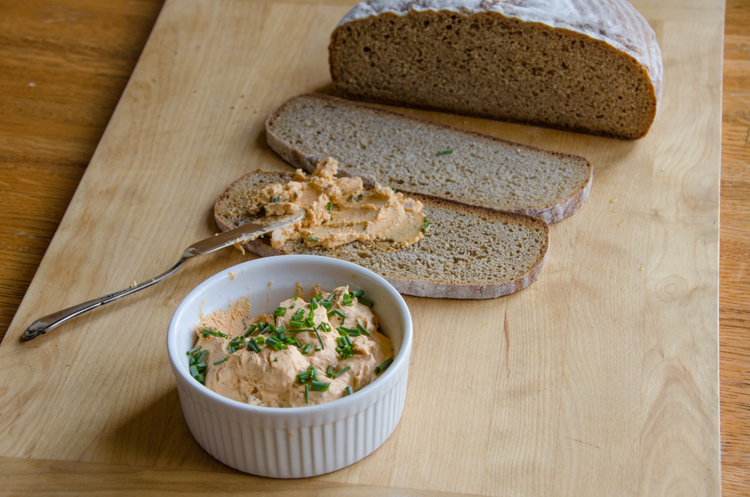 The authors divide the dishes in to three categories: German dishes that were adapted to the rules of the kosher dietary laws, kashrut; specific Shabbat and Holiday dishes; and German dishes, i.e. dishes that German Jews adopted because they were kosher to start with as they were either meat or meatless dairy dishes. This categorization helped me to better understand the subtle differences between German-Jewish and German cooking.

I have always been a big fan of Mehlspeisen, slightly sweet main dishes like fruit-filled dumplings, bread puddings and other meatless semi-sweet dishes, which for me are the ultimate German comfort food (find an overview of my favorites here). In the book these dishes are listed as meatless dairy dishes and I found the explanation for their popularity amount German Jews intriguing. Their family, Gabrielle and Sonya write, “had not kept kosher for multiple generations, yet we continued to eat dairy meals. That could have been a holdover practice (…) Or perhaps it was simply adoption of a Germany culinary tradition of eating Mehlspeisen (…) for the evening meal. Most likely this practice was inspired by both influences.”

In addition to the Sauerbraten (recipe below) and Twice-Baked Potato Schalet, a scrumptious crisp potato side dish, I tried a few other recipes from the book that were a bit like time travel, as you don’t find them in German cookbooks any longer: Liptauer Cheese, a delicious spread, and Rice à la Trautmannsdorf, a sophisticated version of rice pudding. For a neater appearance I layered it instead of mixing in the berries, as I only had frozen blackberries, which would have turned into mush after thawing.

And I have made Berches, the German version of challah with mashed potato in the dough, many times, even before the book came out, as I have been following Gabrielle’s and Sonya’s blog for years. All of the recipes are keepers.

The German-Jewish Cookbook was published in September 2017. My mother-in-law had died earlier that year so I am not able to share this with her. She was a highly accomplished embroiderer of Judaica and someone who not only loved to eat good food but appreciated learning about the stories behind the dishes, I would have sent her the book, and maybe brought along on a visit some of the dishes for a tasting. We would have sat at the end of her long kitchen table and talked about the book for hours. Gladys would have also given The German-Jewish Cookbook five stars and a ‘Mazel Tov’.

This sauerbraten is different from the standard German Sauerbraten in two ways: no cream is added to the sauce (so it’s kosher), and frankly, it does not need it because it is great as is; and secondly, white vinegar is used as opposed to the usual red wine vinegar and red vine. The result is a more subtle flavor, like a pot roast with a sweet- and sour gravy.

Since it was just my husband and myself, I cut the recipe amounts in half and reduced the cooking time.

The recipe called for goose or duck fat, which I could not find this time of the year (our local grocery store only carries it around Christmastime) so I used regular cooking oil.

Gabrielle and Sonya recommend serving this with noodles, Spaetzle, or potato dumplings. I made the Twice-Baked Potato Schalet from the book to accompany it.

2 to 2.5 pounds boneless chuck, rump or round roast

9 thoughts on “Peeling away the layers of German-Jewish Cuisine”

Gyoza is one of the dishes I started making during the last year. Folding them takes practice and it is time-consuming but I don’t mind it, I actually find it relaxing after a long day at my desk. The recipe by @biancazapatka is terrific but I used ready-made wonton wrappers, and of course the vegetables and mushrooms for the filling are from local farms.