The notorious German precision and efficiency transpires in the language, too. Zartbitterschokolade (bittersweet chocolate), Hähnchengeschnetzeltes (sliced chicken in cream sauce), Sauerkirschmarmelade (sour cherry jam)… why use several words if you can pack it into one long composite noun?

A German food word that could not be more spot on is Stachelbeeren (gooseberries). It literally means thornberries. And nasty thorns they have indeed, which makes picking a painful undertaking, like picking berries off a barbed wire. Even if you try to protect yourself with long sleeves and gloves you will end up with bloody scratches.

It was another bumper crop this year and while I was working my way thorough the fruit-laden gooseberry canes last week, I wondered, as I often have, why in the world are they called gooseberries in English. Geese cannot be possibly want to eat them. Sure, a raccoon wiped out my entire crop a few years ago the night before I wanted to harvest them but a goose? No way.

So I started looking around. First I could not find much, then I came upon a German etymological study on plant names from 2001 that laid it all out.

The old German name for the berries, Kräuselbeere, which literally means curled or crimped berries, was is the source of the Medieval Latin name grossularia, which became groseille in French – and gooseberry in English! It should have been grooseberry but the “r” was dropped at some point. Side note for etymology and botany buffs: In French, red currants, also a member of the Ribes genus, are groseilles, whereas gooseberries are called groseilles à maquereau (mackerel gooseberries) because they were traditionally prepared with mackerel.

The first ones to cultivate and breed the initially wild gooseberries in Germany were monks, which is why a regional name for them is Klosterbeeren (monastery berries). From the monasteries the berry bushes found their way into cottage gardens. The name Stachelbeere was first mentioned in writing in the mid 17th century.

This is not the first mystery I solved about gooseberries. Two years ago I found the story how the name of the delectable Hannchen Jensen Torte came about. It lead to the grandson of the lady who started spreading the cake recipe all over Germany interviewing his grandmother about it on video (watch it here). And she even gave me the original recipe written by Hannchen Jensen herself.

My other favorite recipes with gooseberries are:

And this year I can add two new favorites to my gooseberry recipe repertoire: Gooseberry Jam with Lemon Verbena and Gooseberry Elderflower Cordial. I made the jam a few weeks ago for guests and got several requests so I had to write down the recipe. Gooseberries and elderflowers are a wonderful combination and since most likely the birds will eat the elderberries before the fruit ripens in September anyway, I did not feel bad cutting a few more of those precious ephemeral flowers off my elderberry bushes.

Picking the gooseberries is only the painful part. The tedious and time-consuming part comes afterwards when you have to remove the blossom ends. And, unless you pass the berries through a food mill or juice them, this is necessary because those hard dry bits in your jam, pie or cake will spoil the pleasure.

I can see how gooseberry cultivation started in monasteries. Gooseberries require lots of time, something the nuns and monks had so much more of than we do today. And if you discount the scratches, it is almost a repetitive meditative exercise. While I am writing this, my husband is sitting on the couch with a large bowl of gooseberries in front of him, trimming them with cuticle scissors (no kidding, those work best). Except, he is not meditating. He is watching a Yankees game.

If gooseberries are such a pain in the neck, why do I bother you may ask. The answer is simple: they are utterly delicious. And once the scratches are healed and the jars with all the preserves are lined up in the pantry, I have no regrets.

The first time I made this jam I used the whole berries. Since I harvested so many tiny gooseberries, it would have been impossible to trim all of them. Therefore I took a shortcut and passed the cooked berries through a food mill this time. The end result is not quite as pretty as the chunky jam but it takes a fraction of the time.

For either version, I strongly recommend weighing the berries to make sure you have a fruit to sugar weight ratio of 2:1, otherwise it will be too sweet. The instructions for US pectin products tell you that you should not reduce the sugar or the jam will not set but do not worry, gooseberries are high in pectin so less sugar does work.

A small handful (about 24 leaves) lemon verbena (can be substituted with lemon balm), washed and dried

1 package Sure Jell for less or no sugar (pink package)

I used a steam juicer to extract the juice. As I wrote on my gardening blog a few years ago, it is one of my favorite kitchen gadgets. With canning and preserving being so en vogue, I do not understand why it is not more popular in America because the yield is not comparable to what you get with a jelly bag, and it’s so much easier.

You can read more about elderflowers on my gardening blog. 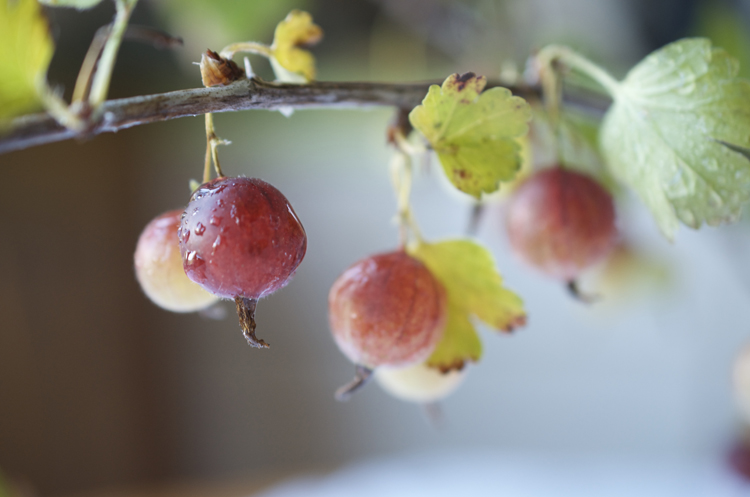 8 thoughts on “Gooseberries demystified: No goose involved but German roots”

It was worth the seven year wait: first seaberry (aka sea buckthorn) harvest from the shrubs I planted in 2014. In Germany they mostly grow along the coast and I am so pumped they like the Pennsylvania climate because I love the tart berries. They are tedious to pick because the shrubs have nasty thorns so it is a real labor of love processing them. But they are are a vitamin bomb superfood. I turned them all into lightly sweetened juice because I like that best. Delicious over plain yogurt.