Probably the biggest reward I get from writing this blog is the feedback from readers, and  “meeting” other bloggers with the same passion: Christie, a British expat living in Germany who explores locally produced, seasonal food in A Sausage Has Two, (she and I did a recipe exchange last year, I made her Pork Medallions with a Wild Mushroom Cream Sauce); and Karen, aka German Girl in America who grew up with German parents in the United States (she interviewed her Aunt Annemarie, also a German-American, and together we did a cross blog post about it).

It always makes my heart jump when readers tell me how well they can relate to my blog, such as Marie, who wrote, “Your posts are balm for the soul! They resonate with my feelings and settle the ache for my other home.” Or Matilda, who commented, “I’m always delighted and fascinated by both your recipes and your tales of German history. Wish I were a philanthropist to welcome each new German immigrant with Spoonfuls of Germany”. I don’t think I could ask for more encouragement.

Sometimes readers of my book or blog contact me in search of specific recipes or ingredients. Maryse from Quebec, who after a visit to Germany developed such a taste for Sweet Woodruff Syrup (Waldmeistersirup), the natural kind that I make, she became determined to find it. She didn’t, instead she ended up mail-ordering plants for her garden this spring, and proudly sent me photos of her first batch of syrup.

And then there is Donna. She first e-mailed me after my blog post about Springerle Cookies last December. She had a couple of Springerle molds and wondered whether I would like to have them. The German friends in her town have died, she wrote, she does not bake as much as she used to, and it was “time they should go to someone who understands their use.”

I had been looking for Springlere molds so that was a perfect occurrence. The larger mold that Donna had bought in Würzburg in 1973 is now hanging on the wall next to my kitchen sink. I see the mold every time I wash the dishes.

Then, even more packages arrived with items Donna entrusted to me. After I wrote a story about Rehrücken, a classic German chocolate cake, she remembered that she had the special baking mold and sent it to me as well. Opening that package was like opening a time capsule. In addition to the Rehrücken mold, other baking utensils and a set of the typical flat German ice-cream spoons, the package contained an antique Luchs measuring cup, which used to be virtually in every kitchen in Germany. I do not have my grandmother’s and had always wanted one, and on my last trip to Germany I had actually asked friends and family to keep their eyes open for one at flea markets.

Throughout our correspondence, Donna’s story emerged. I asked her if she would let me write about her and I am so glad she agreed because it is a such a great story how two military tours of Germany more than 40 years ago, and a wonderful friendship, created and sustained a lifelong love for Germany. And, like it is often the case, at the center of many of the memories is food. 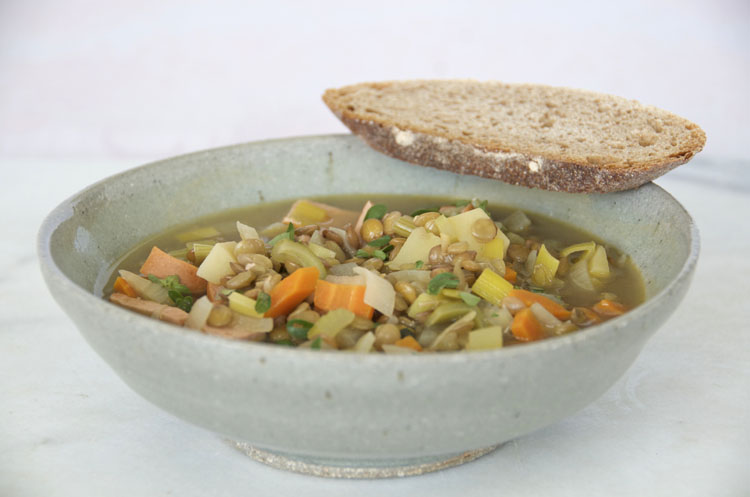 If Donna did not live at the other end of the country in California, I would have invited her for lentil soup and homemade rye bread, which are two of her favorites. I made those anyway, imagining Donna was sitting at my kitchen table and telling me her story.

Donna’s first visited Germany at Christmastime in 1966. She lived in Rome at the time, with her aunt’s in-laws, to learn Italian and became an airline stewardess at the age of 20. In those days, it was not as common as it is today for a girl to travel all by herself but Donna’s parents had let her travel alone since she was 14. Donna’s mother was a LAPD policewoman, and Donna had had three years of years Judo training in the 1950’s. She notes she never had to use it, fortunately.

Her trip to visit her pen pal in Baumholder, one of the biggest garrisons of the United States Army in Germany, where her friend’s father had a teaching job, did not go quite as planned. When Donna arrived at 11 p.m., it turned out that her friend’s family was delayed by a few weeks. Donna was put up at the officer’s hotel and spent Christmas all by herself. Still, she remembers it as being beautiful, with four feet of snow and quiet.

On January 1, she met a young American who was stationed at the Army Base of Bad Kissingen. He proposed on January 2, and Donna accepted the next day. A few weeks later she joined her fiancé in Bad Kissingen. It took five months to get the paperwork together, and in June they were married. “The mayor was all formally dressed in top hat and tails but the rest of us were less ceremonial,” Donna remembers. “Our two witnesses had hangovers, and we did not really get to pick the date. We got married on June 13 to meet the Army deadline for extra pay. His parents and mine did not meet either of us until a year-and-a-half later.”

The time in Bad Kissingen was followed by many moves during their eight years of marriage. Donna and her husband returned to the United States, then did a second tour in Germany from 1971 to 1974 to Üttingen near Würzburg where their second son was born.

It was during that time that Donna met Marianne who lived with her family across the alley. Marianne had worked for the American Army in the 1950’s so she knew English very well, and Donna found her more American in her ways than German. Through Marianne, Donna got a little taste of the discrimination that some ethnic German refugees from the East faced in post-war Germany. Marianne, whose father was German and whose mother was Bohemian, had come to Germany towards the end of the Second World War. “They were shunned for a long time,” Donna says.

Marianne was 13 years older than Donna. “She was like a big sister to me. I guess since my grandma really raised me from when I was a baby till my parents remarried, I have always gotten along with older persons.” 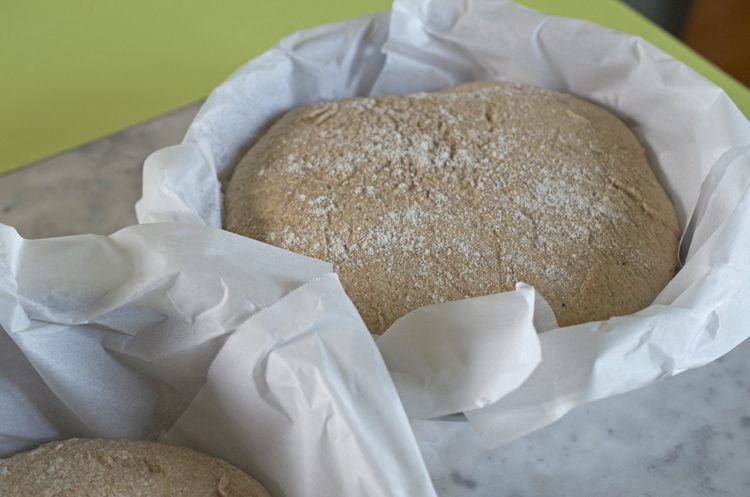 Donna taught Marianne to drive their big 4-door Ford before she even took driving lessons. They traded American foods and liqueur. “I always made sure to bring loaves of our white bread, which Marianne’s boys loved. They grabbed four slices and shoved them into their mouths while other slices were in the toaster.” Marianne, on the other hand, was surprised that Donna did not feed her infant son lots of carrots so his cheeks did not have the same healthy complexion as many German babies.

Donna marveled about the 60+ cakes that Marianne made for a wedding in only two days, and about the more than 500 cookies that she baked every Christmas. “I did not believe it until they brought one of the boxes down from the locked attic. They were kept there because otherwise the boys would eat them all.” 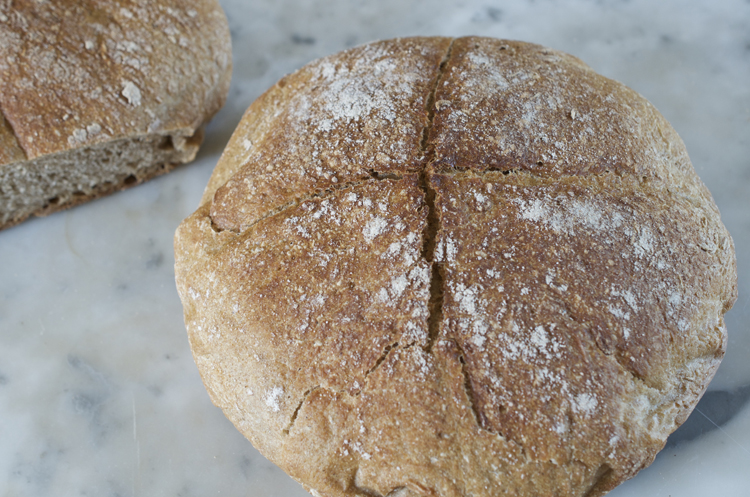 Marianne usually stuck close to home and got homesick just going to Würzburg so Donna was happy when Marianne decided to visit her in Los Angeles in 1993. “Like me, she loved yard sales but would not barter. At the beach she got tar on her feet and she was surprised that my older son cleaned her feet. She was such a warm and fun-loving person, unforgettable. In 2002, I talked with her on the phone while she was dying from cancer, and said good-bye and how much I loved her. It was such a special bond that I never had with my sisters.”

Among the German friends Donna made in the United States was Monika from Berlin who lived on the same street. She was Jewish and managed to get out of Germany with her immediate family in 1939.

Donna revisited Germany in 1992. A trip to the local bakery to buy chocolate kisses was a must, and Donna has a special story to tell about those. “In 1971, my 17-year-old brother-in-law lived with us for a school year. I sent him to the bakery with five marks and he came back with a huge shipping box of 50 (they were 10 pfennig each), he liked them so much.” Since then, the word for chocolate kisses has been changed from the discriminatory “Negerküsse” to the politically correct word “Schaumküsse” which Donna was not aware of. The young lady at the bakery gently corrected Donna before handing them to her.

Many of the German kitchen tools and utensils Donna acquired date back to her time in Germany, some of them she bought later in the United States. “I have been going to yard and garage sales and thrift stores ever since it got popular in the late 1950’s.” She also found things at the Sperrmüll, which in Germany is the special trash pickup for large items. „I never knew when those days were, they were posted in the local newspaper which I did not have, and the Army newspaper did not post them, they never had any local news. So I would just stumble into stuff walking from town to the Army barracks. That’s how I found coal buckets (my older son uses them to store canes), road signs and a ceramic wall coffee grinder. I bet people thought I was just a crazy American!”

I asked Donna what in retrospect she appreciated most about Germany. “Marianne,” she answered. “Taking her sons trick-or-treating on post with my son. Learning German customs such as always giving an odd and never an even number of flowers to someone. That houses have vestibules. And no matter the size of a town it had a garden shop or florist. It was a most wonderful time of my life.”

6 thoughts on “Every object has a story”