“Where are we going”? I asked my mother after she picked me up from the airport in Frankfurt on a day in early May a few years ago. I had been dozing in my seat and first thought I imagined that she took unfamiliar country back roads instead of heading back home. “Didn’t you want do pick Bärlauch (ramsons)? I will take you to a great spot.” Of course I wanted to.

The ramsons hype in Germany started after I left Germany. There is ramsons pesto, bread, cheese, charcuterie and countless other specialties with ramsons. Today in the springtime almost every restaurant has something with ramsons on the menu. On my visits I had eaten the wild garlic in many forms and loved it. But I had never been there for the short harvest in the spring. So now was the time.

We parked in a deeply wooded area by the roadside. My mother, as always, was well prepared: two pairs of old sneakers, scissors, and two baskets neatly lined with paper. It was a weekday so there was no one else around. The trail led us deeper and deeper into the woods. I started getting nervous. Someone could have watched us getting out of the car and now follow us. I started turning around every few steps. “How much farther”? I asked. “Oh, almost there,” my mother replied.

A few minutes later, I started to get panicky. I imagined us being featured on Germany’s Aktenzeichen XY, the German version of America’s Most Wanted: “German woman living in the US and mother disappear while picking ramsons”. My mother laughed at me. “Don’t worry, I have a cell phone.” By the time you unearth your cell phone from your handbag, it will be too late to call for help, I thought. Two minutes later, in utter panic, I asked again, “How much longer?” “Look, I can defend us,” my mother said and grabbed a large gnarly branch off the ground. I just shook my head and stumbled along, jetlagged as I was.

Finally we arrived at the spot, a steep drop with ramsons growing galore between the moss-covered wet rocks. It did not take long two fill our two baskets although it was already a bit late in the season so some of the ramsons had already started blooming. 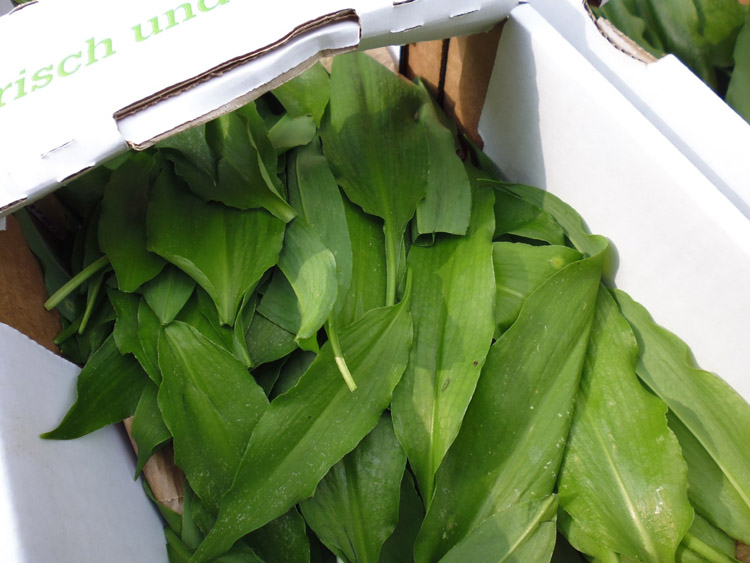 Back at the car, as we were changing back into our shoes and I was taking a deep breath of relief, a police car slowly drove by. It could have been a coincidence but I realized later that the police might have been checking what we were doing because harvesting ramsons for more than personal use is not allowed in nature reserves, and people who have been caught with a trunk full of ramsons have been fined.

Ramsons were known as a herbal remedy since Germanic times but then, like other herbs, forgotten. With the ramsons renaissance in the last decade they have appeared in many home gardens. If ramsons like a spot, they will naturalize easily to the point where they become so abundant that people try to get rid of them.

There are no ramsons in North America but there are ramps. Ramsons and ramps are not the same plant but related. Ramsons (Allium ursinum) is the European relative of ramps (Allium tricoccum). Ramps are also called wild leeks or wild onion but I find those names a bit misleading because ramps have a distinctly garlicky flavor that onions and leeks don’t have.

For me, the main difference between ramps and ramsons, however, is how they are harvested. In Germany, only the leaves are removed, and it is even recommended to take only one leaf per plant in order not to weaken it.

In the United States, ramps are pulled with their bulbs. With the increasing popularity of ramps in recent years, wild ramps populations have been dramatically depleted, not only by foragers who are eager to put ramps on their own table but also by chefs or people who sell them to restaurants and markets.

There is a movement to stop this. In Quebec, ramps are on the list of threatened plants, and their sale is prohibited. Some places in the United States such as the Great Smoky Mountains National Park in North Carolina and Tennessee have also banned ramp harvesting. Massachusetts-based wild foods advocate Russ Cohen recommends that chefs do not buy ramps with bulbs, and suggests finding an alternative way of calculating the price of ramps so that it is not a disadvantage to get the leaves only. I hope the sustainable way of ramps harvesting and foraging the way it is done in Germany will gain momentum here.

When you look at the photos you might say, “What is she talking about, I see ramps with bulbs here?” Well, this is the third year I have bought ramps from a local grower who removes a moderate amount from long-established populations on his farm. If the bulbs are small, he simply puts them back in the ground. And that’s what I do, too. I take one leaf from each of the ramps for cooking; the rest of the plant goes into my ramps patch.

One of my greatest joys in the early spring garden is to see that the ramps I have planted underneath a tree in the last two years popped back up and look healthy. This week the ramps will get more than three dozen new neighbors, and I will need to expand the patch. It might take a few years until I can harvest my own ramps, and when I do, I will only take one leaf per plant.

With ramps growing in my own garden, I don’t feel like missing out not being in Germany for Bärlauch season any longer. And, quite frankly, I am not sure whether I would be up for another foray deep into the woods with my mother again.

1. Mix the yeast with the milk in a small bowl and set aside until frothy, about 10 minutes.

3. In the meantime prepare the topping. Whisk the sour cream, heavy cream, eggs, half of the chopped ramps leaves, salt and pepper.

5. On a lightly floured surface roll out the dough in a circle large enough so it fits the pan plus a 1-inch edge all around. Pat the edge to even out the height and trim as necessary. Cover and let rise for 10 minutes.

6. Prick the bottom of the dough several times with a fork. Pour the filling into the pan and bake in the preheated over for 35 minutes, or until the crust is golden and pulls away from the pan and the filling is set. Remove the springform rim and sprinkle with the remaining ramps. Le stand for 10 to 15 minutes before cutting.

6 thoughts on “Wild about ramsons (Bärlauch) and ramps”