Zigeunerschnitzel (Gypsy Schnitzel) is usually not prepared by home cooks in Germany. The thin breaded schnitzel smothered with spicy pepper sauce and topped with mushrooms is something you would order at a restaurant. If you can find it on the menu under that name, that is.

In 2013, the city of Hannover banned the name Zigeunerschnitzel from all its municipal eating establishments after the Hannover branch of the Forum of Sinti and Roma, the German association of the Romani people aka Gypsies in English, filed a discrimination complaint.

Hannover was the first city in Germany to ban the name. Now it’s called Balkanschnitzel. The following year, the Interior Ministry of the State of Baden-Württemberg followed suit, no more Zigeunerschnitzel in its cafeterias neither.

In contemporary German the term “Zigeuner” has been replaced by “Sinti and Roma”. Zigeuner was also the term under which the Nazis persecuted the Sinti and Roma. More than 500,000 Gypsies perished during the Third Reich.

So, yes, the term Zigeuner is indeed politically incorrect when referring to the ethnic group. But going after a harmless dish? I doubt that it does anything. Eating a politically-correct renamed schnitzel does not inject the person who eats it with tolerance and respect for people with a different skin color, language, culture or religious belief. These attitudes come with the atmosphere in which the dish is eaten, no matter what its name is.

In a guest blog post called “Food Names That Don’t Go Down Well” that I wrote a while ago, I pointed out that German has many other dishes with names that could be viewed as ethnically offensive: the half-moon cookies called Amerikaner (Americans), Franzosensuppe (Frenchmen’s Soup), Russische Eier (Russian Eggs)… the list goes on.

After reading that blog post about food names, a friend of mine living in Hannover emailed me the menu of a local steak restaurant. “Look,” he wrote, “there is still Zigeunerschnitzel on the menu, in the good company of Jägerschnitzel (Hunter Schnitzel) and Wiener Schnitzel (Viennese Schnitzel). Maybe the owner is simply insensitive because the kids’ menu suggests eating entire members of the Duck family with dishes like Donald Duck, Scrooge McDuck and Aunt Daisy.” 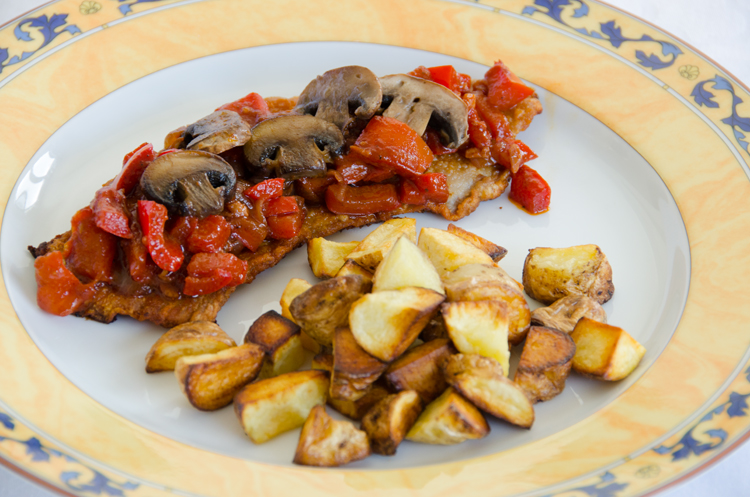 It has been ages since I had eaten Zigeunerschnitzel. Frankly, I did not have very good memories of it – too much sauce that tasted like it was coming from a package, and rubbery canned mushrooms. But I was ready to give this German-Austrian classic a fresh, unbiased start, using the last peppers of the summer from my garden and fresh mushrooms. Made from scratch is a different matter, and delicious.

And if you share my you have ethical concerns about eating veal, note that it is just as good with pork or chicken cutlets.

At restaurants in Germany, the schnitzel is usually served with French fries; we had it with roasted potatoes instead.

1. Heat 2 tablespoons olive oil in a medium saucepan. Add the onion and cook over low to medium heat until soft and translucent.

2. Pound the peeled garlic cloves with the kosher salt in a mortar to a paste. Add to the onion and cook for 1 more minute, until the garlic is translucent.

3. Add the bell peppers and cook until they start to soften, stirring often. Add the wine and cook until it is almost completely evaporated. Add the tomatoes, paprika and smoked paprika and mix well. Reduce the heat and cook uncovered for 10 minutes, or until the sauce thickens, stirring often. If the sauce is too thick and starts to stick to the bottom of the pan, add a bit of water, wine or tomato juice. Season with salt, pepper, paprika and smoked paprika to taste. Cover to keep warm.

4. Heat 1 tablespoon olive oil in a large nonstick skillet. Fry the mushrooms in a single layer until soft, turning them as needed. Lightly season with salt and pepper. Set aside and keep warm. Wipe the skillet with paper towel.

5. Wash the cutlets under cold water and dry them well with paper towel. Lightly dredge the meat in flour and shake off any excess.

6. Heat 2 tablespoons oil in the skillet. Place no more than two cutlets at once in the skillet and brown both sides on high heat, then reduce the heat to medium and fry each side until cooked through. Remove the meat from the skillet and keep warm. Fry the remaining meat the same way.

17 thoughts on “The politically incorrect schnitzel”