With my grandmother’s generation gone, handed-down recipes drifted into oblivion. And a common sight when I grew up also vanished: my grandmother, great-aunts or friends’ grandmothers who lived with the family, sitting at the kitchen table with a bowl in their lap, peeling potatoes or helping out with some other food preparation.

Today it is rare that several generations live under the same roof. And it is the exception and not the rule that the 800,000 seniors who live in assisted living facilities in Germany participate in the preparation of their meals.

The four authors of the new German book, Wir haben einfach gekocht, toured 12 senior citizen homes around Germany, usually spending two days at each location. On the first day, the authors asked the residents about their favorite dishes, and on the second day the authors and the residents cooked a three-course meal together, based on the recipes the residents had provided, most often from memory.

The result is a book with 100 recipes of real German home cooking and comfort food. Long before the term “locavore” was coined and seasonal eating became en vogue, these women – 73% of the residents in senior citizen homes in Germany are women – cooked with whatever was available. The title of the book can be translated either as “We simply cooked”, or “We cooked simply.”

The book is not only a treasure chest of regional recipes, it is a also a trove of kitchen tips and tricks.  The cookbook is also a trip back in time when you had to make do with whatever you could get your hands on, and cooking everything from scratch was not a hobby but a necessity.

“Food is memories. Food is home.” This statement from the introduction of Wir haben einfach gekocht is a common thread for me as well, a theme I started to explore 12 years ago with my book Spoonfuls of Germany.

A lot of emotions and nostalgia is packed into Wir haben einfach gekocht. Yet each time I was getting sentimental reading the book, or looking at the many photos – my favorites are all those beautiful old hands at work – I had to laugh out loud: 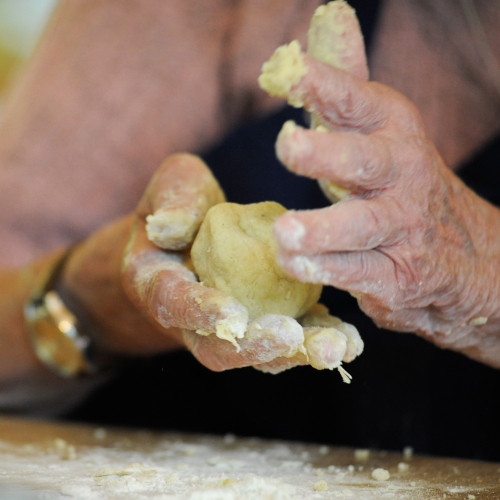 “With this book,” the authors write in their introduction, “we not only want to capture culinary memories but we also want to kick off a social debate about the role of eating as an emotional pleasure for residents of senior living homes. Because this project has shown how much seniors enjoy being part of the food preparation and the cooking process.”

If the attention and media coverage that the book has received is any measure, Wir haben einfach gekocht has already made a splash. The first edition sold out so quickly that the publisher has ordered a reprint. There are currently no plans for an English translation.

The book certainly had me thinking a lot about food and ageing. After a life of passionate cooking, how would I feel in my old age if a plate of food – even if it was tasty – was put in front of me every day, without me being involved in the preparation at all? If I am still physically and mentally able to, I imagine that I would want to at least help peeling potatoes or shelling peas, just like my grandmother in my mother’s kitchen many years ago, and just like my mother on the patio when she visited us from Germany last summer.

This is a dessert I had always wanted to try. By coincidence it was contributed by seniors in Frankfurt, where I am from. Similar to Arme Ritter, the German version of French toast, it is made with leftover dry bread. In grandma’s cooking, nothing would go to waste!

I had seen Karthäuser Klöße with fruit sauce before but this is a Frankfurt variation with apple wine sauce, which is absolutely delicious.

Luckily, after years of craving apple wine here in the US, I can now buy hard cider in our local supermarket. Hard cider is a good substitute for apple wine, Frankfurt’s signature drink.

1. For the sauce, heat the hard cider with the sugar in a small saucepan, stirring to dissolve the sugar. Add the vanilla extract.

2. Place the raisins in a small bowl and pour about ½ cup of the sweetened hard cider over them. Set aside.

3. Dissolve the cornstarch with 2 tablespoons cold water and whisk it into the hard cider. Bring to a gentle boil over low to medium heat, stirring constantly, until the sauce turns clear and thickens. Remove from the heat and let cool for 1 to 2 minutes. Stir in the egg yolks and let cool.

4. Beat the egg whites with a pinch of salt until they stand in stiff peaks. Stir the raisins with the cider into the sauce, then fold in the egg whites. Refrigerate until serving.

6. In a small bowl, mix the milk with the heavy cream. Pour over the rolls and let soak for 10 minutes, stirring once to evenly distribute the milk.

7. Lightly beat the eggs and the egg yolk in the small bowl. Add it to the soaked bread rolls and combine well with a wooden spoon. The mixture should be firm enough to be shaped with wet hands. If it is too liquid, add a bit more flour, a tablespoon at a time.

8. Heat about 1 inch (2.5 cm) vegetable oil in a small saucepan until it is hot enough to sizzle a breadcrumb.

9. With wet hands, shape the bread mixture into golfball-size fritters. Dredge them in the reserved breadcrumbs and fry for 4 to 5 minutes until golden brown on all sides. Fry only a few fritters at a time so you don’t overcrowd the pan.

10. Degrease the fritters on paper towels. Dredge in sugar and serve while still warm with the lukewarm or chilled apple cider sauce.

7 thoughts on “The joy of cooking has no age limit”