Oscar Rosen and his wife Rachel Rosen, née Kesler, on their engagement in Metz, France, February 1936.

A few months ago, I watched a German TV program about Niklas Frank, the youngest son of Hans Frank, who as governor-general of occupied Poland in World War II was responsible for the murder of the Polish Jews and other war crimes and crimes against humanity. Talking about the right-wing German party AfD and its claim that the years between 1933 and 1945 were merely a “stain” in Germany’s “glorious” history, Niklas Frank said, “Someone who really loves Germany (…) first and foremost carries the pain about those 12 years.”

In other words, Nazi Germany is by no means a closed chapter of history. It remains woven into what Germany became, and what it is today. That’s the way I have always felt, and that’s why I have not shied away from touching upon the topic on this blog when writing about my grandfather and my grandmother.

Today I am picking up the topic once more because December has been an especially intense month of reckoning with the German past for me.

During my visit to Germany, I helped my mother empty out the apartment of her older brother who has moved to assisted living. My uncle had lived with my grandmother most of his life, and he had never sorted through her belongings after her death 15 years ago.

Among the items we found were family photos and documents I had never seen, including the letter my grandmother received after my grandfather went missing in the battle of Stalingrad in early 1943. The letter ended with the greeting “Heil Hitler”. Although I had known about my grandfather’s fate all my adult life, holding that piece of paper in my hands hit me squarely, like a punch to my face.

In the apartment, every closet and cabinet was filled to the brim, and every room was stuffed floor to ceiling with boxes. It was a living testimony of the habit to keep and save every scrap, which was typical of my grandmother’s generation who often lost all their possessions during the war. The piles of junk included humongous amounts of packaging materials, whereas the “good” things and valuables were stashed away for special occasions, which never came.

Within a couple of days. we filled an entire dumpster. As awful as it was literally tossing out the traces of these two hoarders’ lives, it also felt liberating. I walked away with a few of my grandmother’s things, carefully wrapped them and took them with me to America. They are now, probably for the first time, displayed where you can actually see them, and they will be used.

Back home, as I was still catching my breath and digesting my trip to Germany, an email arrived from Michael Rosen in London, my husband’s second cousin, about the upcoming release of his latest book, The Missing.

The book is about Michael’s quest to find out what happened to the sisters and brothers of his paternal grandfather who, unlike his grandfather and my husband’s grandfather, were in occupied Europe during the war and all perished during the Holocaust.

The essential clues to piece together part of the family history surprisingly came from the United States. About ten years ago, after my husband’s maternal uncle Ken died in California, my husband received two large envelopes with some of his uncle’s personal papers, including two postcards and two letters written in German dating from 1940 and 1941. They had been part of Ken’s sister’s estate, Dorothy, who was my husband’s biological mother and had died 60 years ago. The two postcards were from great-aunt Stella, sent from occupied Poland to her brother Max in Boston – my husband’s grandfather – urging him to help rescue her only son. The two letters were from Max’s brother, my husband’s great-uncle Oscar, who lived in France.

Prewar photo of Michael Rechnic with his mother Stella née Rosen, and his aunt Bella Rosen. Michael survived the war and made it to England.

A few years later, after my parents-in-law had both died, more clues emerged: prewar photos tucked away in an unmarked, heavily taped shoe box in the back of a closet. My husband gave copies of all of these photos to his cousin Michael Rosen in London.

Long before Michael pieced the family history together in his book, the presence of those letters, postcards and photos had been following me. I often lay awake at night thinking about my own great-aunt Lotte’s beautiful cottage garden in Westphalia, and how she tended to it until the age of almost 90. I contrasted this with the great-aunts of the man with whom I was sharing my life. Stella and Bella perished without a trace.

I was born 20 years after the War, and all of this happened almost 80 years ago but both threads of history, the side of the victims and the side of the perpetrators, converged in my own life. This haunted me. By telling the story of the “missing Rosens”, Michael Rosen has indelibly paid tribute to their memory. Gladys, my mother-in-law, did the same when she stitched their names into the Torah mantle she embroidered with the names of 300 Holocaust victims from families in her congregation in Connecticut.

In his book The Missing Michael writes about the silence he encountered when he asked his parents about the relatives who had vanished. My husband experienced the same silence when he asked his father similar questions. And for me, silence is also what many in my generation encountered when we asked our grandparents, or anyone who was an adult during Nazi Germany. Mute silence was the way to handle what was too much to bear, the guilt of the Jewish survivors, and the guilt of the German bystanders. The code of silence kept the two postcards and two letters out of sight and out of the conversation for 70 years. 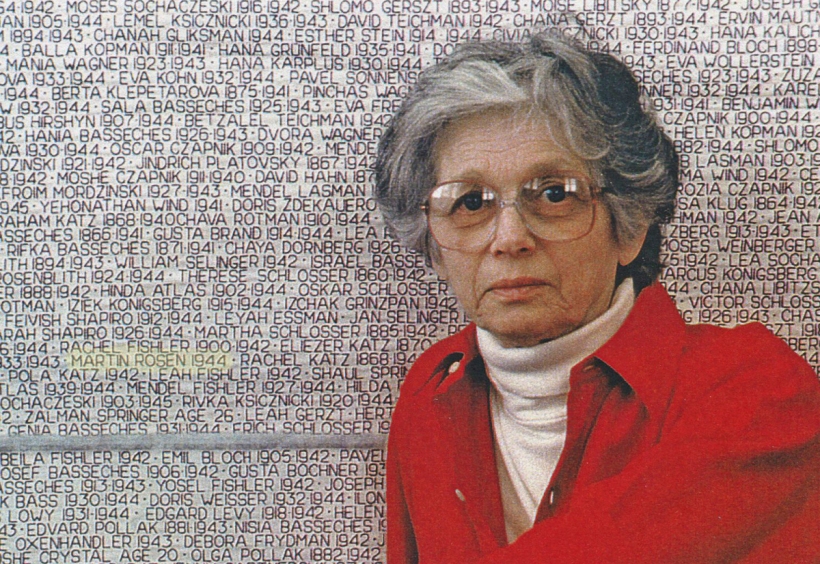 My mother-in-law, Gladys Rosen, in 1994, with the Torah mantle she embroidered with the names of 300 Holocaust victims from families in her congregation in Connecticut. The name of Martin Rosen is highlighted in the photo.

Now, what’s one to do with all that pain about the past? To me it is looking ahead to see what’s happening around us today. In his interview this past weekend with The Guardian, Michael Rosen did not hesitate to make the connection to today’s refugees from Syria and other asylum seekers in the UK and the US: “Rounding up people, putting them into containments, imprisoning them, taking their papers away – all that is having resonance with me.”

There is only one way of reckoning with the past. Remember the past, grasp its lessons and apply its lessons by speaking up to oppose discrimination and mistreatment of people because their race, ethnicity, or religion is different. Different skin colors, different cultures and religions, different languages other than English, I know only one thing for sure. We are all the same, just different histories that all intersect, eventually.

5 thoughts on “The missing, and the silent”