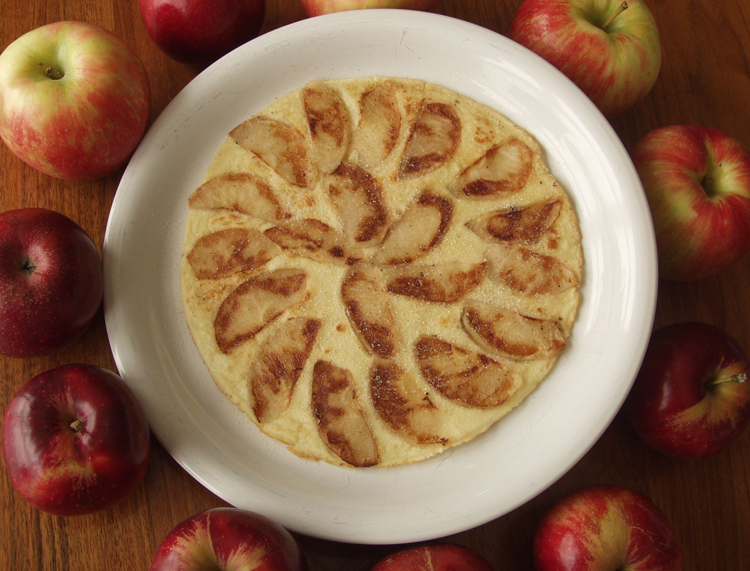 In September, on a day with glorious early autumn weather, the video team from The Year of German-American Friendship (Deutschlandjahr) came along when I went apple picking at my favorite local orchard, County Line Orchard.

I had written about the owner, Todd Smith, in my very first blog post for The Year of German-American Friendship last October, so this was a wonderful way of wrapping up my participation in this year-long cultural diplomacy campaign.

Later, the team filmed me making German Apple Pancakes in my kitchen.

Please note: The correct amount of sparkling water is 1/4 cup, not 3/4 cup.

I’ve had the recipe for German Apple Pancakes on this blog since 2013 but I am reposting it below. And bit about the background too, because you need to know that German pancakes and American pancakes are not quite the same.

Unlike me, my husband does not enjoy cooking. His repertoire nonetheless includes two dishes where I yield the kitchen to him without hesitation: grilled cheese sandwiches and American pancakes. The emphasis is here on American because German pancakes are quite different, in ingredients and size, and they are also eaten at a different time of the day.

On more than one occasion my husband announced to friends or family visiting from Germany that he would make them pancakes for breakfast the next morning. Sometimes he got a puzzled look and lack of enthusiasm, which he did not understand. So I told him he should explain that pancakes are a breakfast fare and that American pancakes are actually much smaller than German pancakes (we also made a video about this for the Heartbeats series by Deutschland.de, to watch it click here).

Because German pancakes are large you rarely eat more than one, and they are served as a light meal, dessert, or snack. Pancakes are a bit what mac and cheese are in America: popular children’s food.

Just like German chocolate cake, the American “German pancakes” originated on this side of the Atlantic. The Dutch baby was invented in Seattle, Washington, and the Dutch in the name comes from Dutch as in Pennsylvania Dutch, meaning it refers to the German immigrants in the 17th and 18th century.

I grew up on pancakes – the real German pancakes – that my grandmother made for me as a lunch after school. She often added apple slices to the batter, and those apple pancakes were my favorites. When she made plain pancakes they were filled with thick chunky applesauce or another fruit compote and rolled up. Pancakes were always sprinkled with cinnamon sugar; there was no maple syrup in Germany at the time.

My husband and I are open to each other’s food tastes, however we each stick to our pancake heritage. He makes his pancakes only for breakfast, and he only eats them with maple syrup. I never make German pancakes in the morning, and I always eat them with applesauce or whatever other homemade fruit compote I have on hand. He eats my pancakes with maple syrup, and I eat his with fruit compote. Call it a German-American marriage compromise.

The step of caramelizing the apples can be skipped but I find the softer texture of the apple slices worth the extra effort. If making plain pancakes to fill and roll up, use 1/3 cup of the batter for each pancake.

1. In a bowl, mix the flour with the eggs, salt, milk, seltzer and vanilla extract, using a wire whisk or an electric mixer. Beat until the batter is smooth and free of lumps. Set aside.

2. Mix sugar and cinnamon in a small bowl to taste. I use about ½ teaspoon cinnamon for ¼ cup (50 g) sugar.

4. Heat 1 tablespoon butter in a 10-inch non-stick skillet over low to medium heat. Place the apple slices in a single layer and sprinkle them lightly with cinnamon sugar. Fry until they start to soften and color, about 3 to 4 minutes. Turn them over and fry from the other side for about 2 minutes. Carefully remove them from the pan and place them on a large plate in a single layer.

5. Wipe the pan if there is any sugar sticking to the pan. Heat 1 tablespoon butter in the pan. Pour ½ cup of the batter into the pan in a circling movement to distribute the batter evenly, then tilt the pan slightly so the batter covers the entire bottom of the pan.

6. Immediately place the caramelized apple slices on the batter. It does not have to be a decorative pattern but is it important that the apple slices are placed apart and not overlapping. Fry until the top of the pancake is set and the bottom is lightly browned. You can check by lifting up the edges with a fork. Flip the pancake over using a large lid or a plate and cook from the other side until lightly browned. Slide the pancake onto a plate.

7. Keep the pancake warm by placing a large bowl over the plate, or put the plate in the oven set to the lowest temperature. Prepare the remaining pancakes the same way. Serve sprinkled with cinnamon sugar.

3 thoughts on “Wunderbar Together videos feature Spoonfuls of Germany”

It was worth the seven year wait: first seaberry (aka sea buckthorn) harvest from the shrubs I planted in 2014. In Germany they mostly grow along the coast and I am so pumped they like the Pennsylvania climate because I love the tart berries. They are tedious to pick because the shrubs have nasty thorns so it is a real labor of love processing them. But they are are a vitamin bomb superfood. I turned them all into lightly sweetened juice because I like that best. Delicious over plain yogurt.