For most of my 21 years in America, I have been baking my own bread. If you have lived in Germany with its tremendous variety of wholesome breads, you just cannot be without it. As a wrote before, baking German breads in America can be challenging, and I am always on the lookout for suitable flours and grains. In the case of Castle Valley Mill in Pennsylvania, the grains and flours include a German-American connection – and also a slice out of American colonial and industrial history.

Henry Fischer, a native of Erlbach in Bavaria, immigrated at the age of twenty to the United States after World War I. He settled in Doylestown, Pennsylvania, and started a route for milk trucks, eventually expanding to include a moving company, Fischer’s Transfer. What was not so obvious was that Fischer came from a milling family and had been trained as a miller back in Germany. Milling was literally engrained in Fischer.

His business prospered and when his truck drivers weren’t busy, he sent them around in the area to collect discarded milling equipment from the many old mills that were closing down as a result of the quickly consolidating American flour industry. Henry stored his finds on a 20-acre property situated on Neshaminy Creek that he bought in 1947, near the home where he lived with his wife, also of German descent, and their children. The property had a mill dating back to 1730, a stone house from 1716, and a barn, all in poor condition.

For a few years it looked like the old mill would never come back to life until Henry’s grandson Mark Fischer took it on. Fran Fischer, who is married to Mark, said, “Henry sadly ran out of lifetime.” Mark’s father had no interest in the mill that was eventually stuffed floor to ceiling not only with the disassembled remains of milling machines from Henry’s collection, but also with decades of discarded household items and junk that family members stored there.

Twenty-two years ago, Fran and Mark bought the property from the family. First, they restored the house, so they’d have a place to live and raise their three children. Then came the restoration of the barn. The biggest challenge, the mill, was last.

By then, both Mark, an electrical engineer and a business aviation consultant, and Fran, who worked in the commodities business, were ready for a career change. They decided to clear out the mill and see if Mark could assemble the machines and various parts and make the mill run again. He did.

Roller mill by E. P. Allis & Co. It sent its milling engineer William D. Gray to Europe to scout out milling practices which resulted in him inventing an improved roller mill, which was patented in his name in 1879.

Various wooden parts and sections of the milling equipment were scattered helter-skelter around the three floors of the mill. Fran said Mark had to become a “forensic miller” to make sense of the thousands of parts and assemble them into an operating mill. When Mark was unable to identify a part, he checked with the United States Patent Office. Mark and Fran gave each of the restored machines names like Jules after Jules Verne, and Victoria. At present a single electric motor drives the entire system. They plan to eventually return to hydropower.

The automated flour mill at Castle Valley Mill is US patent #3, invented by Oliver Evans of Philadelphia in 1790. It uses gravity for grain milling and works without the aid of manual labor other than two persons to set the machines in motion and supervise the process. This was a huge step forward in 1790. Before Evan’s labor-saving invention, the grain in a mill had to be hauled manually up and down and around the mill.

When Mark brought Fran the very first batch of flour he had ground, she made her grandmother’s pumpkin bread. “It was a Eureka moment,” she says. “I ran over to the mill with the still warm bread in my hands so Mark could taste it.” Anyone who bakes can relate to this. The flour makes all the difference. Castle Valley Mill sources the grains – soft and hard wheat, rye, spelt, emmer, and corn – directly from farmers, when possible locally. There are grain towers for hard wheat and yellow corn. Space is always a challenge; the mill is not set up for long-term storage of grains, and the grains are milled as needed, which ensures the freshness of the flour.

The grains undergo two or three cleanings and then they are stored as clean grains. When an order comes in, the grain is slowly stoneground into flour at cool temperatures. The grain mill is not heated, and there is no air-conditioning. We visited on a mild October day and I can only imagine how it must be for Mark and his assistant to be operating the mill on a sweltering summer day or in deep winter. Stone-milled grains still contain all the components of the grain, whereas commercial flours have the germ removed to make the flour shelf-stable. This has direct impact on the nutrients: stoneground wheat flour contains three times as much vitamin B than mass-produced whole wheat flour.

Some of the flours are given a special treatment in the mill’s bolting room. “Bolting” is another word for sifting. Still, even after bolting, all of the germ and nutrients remain in the flour. Because the flours contain no preservatives, they need to be refrigerated (I freeze mine). The visually most striking product from the mill are Bloody Butcher Grits, an heirloom variety made from Bloody Butcher Corn. This is a dent-type corn has been grown in the United States since at least the mid-19th century. Castle Valley Mill views as its mission the preservation of heritage grains, in addition to offering excellent products, keeping history alive, and supporting local farms.

Castle Valley Mill delivers about 7,000 pounds of grains and flours per week to its distributor, directly supplies restaurants and bakeries, and sells its products online. 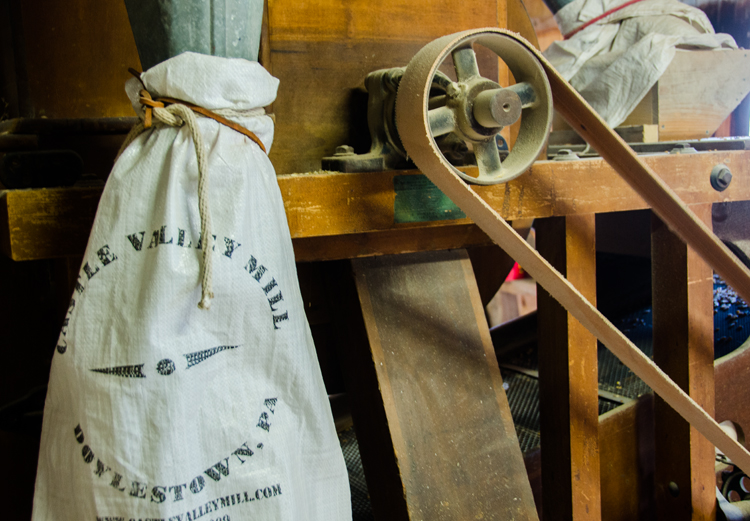 The 3,000 pound French Buhr stone is where the magic happens and the grains are ground into flour. Buhr stone is a freshwater quartz imported from Alsace in France, where most of the raw quartz was quarried. Buhr is highly sought after because of its ability to maintain a sharp edge.

The millstones don’t remain sharp forever, they need to be dressed, i.e. sharpened, every six months, which is a laborious job that takes a full day. I learned from Fran that this is where the expression “keep your nose to the grindstone” comes from. It requires a special tool, a cross between a hammer and hatchet, used to painstakingly re-cut grooves into the face of the bottom grindstone. It’s like a jeweler’s job with a hammer and you must pay attention to every swing of the tool. Fran says the “pay attention to the grindstone cutting” became “keep your nose to the grindstone.”

Dressing the millstone is not without risks. The freshwater quartz itself is so hard that it chips off small, skin-piercing fragments from the steel tool. The first time Mark dressed the surface, he couldn’t understand why he ended up with speckles of blood on his hands and arms. It dawned on him that it was microscopic shrapnel from the metal of the hammer. Now he also wears long gloves when dressing the millstone.

Their son Curran has restored some of the milling machines by himself, and with his father he completed the Miller Training Sessions and Certification Program of the Society for the Preservation of Old Mills.

The appreciation for what Fran and Mark have created at Castle Valley Mill extends all the way to Germany, where the family mill is still operating in Erlbach, and the connection is being kept alive through family visits.

This is not a German recipe but I want to share it here because I cannot think of any better, faster and easier foundation for all my homemade German jams and jellies than these biscuits. I bake the biscuits often and over the years I have experimented with many different flour combinations. When I used half pastry flour from the supermarket and half whole-wheat flour from Castle Valley Mill, I had a Eureka moment not unlike the one Fran Fischer had with her banana bread.

The recipe is adapted from Deborah Madison’s Vegetarian Cooking for Everyone, a book that was published the year before I moved to America, and it’s the most dog-eared cookbook in my collection. 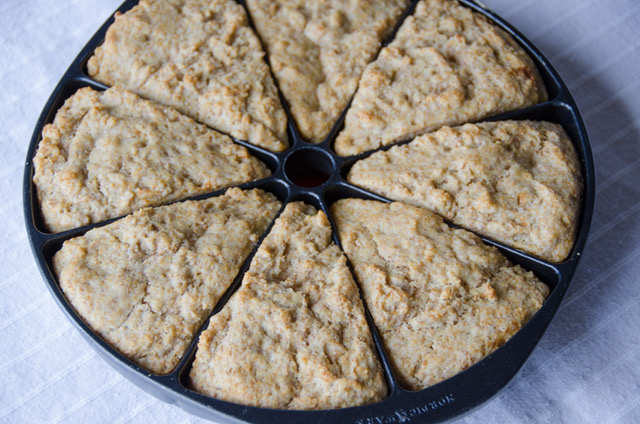 9 thoughts on “Down by the old mill stream in Doylestown, PA”