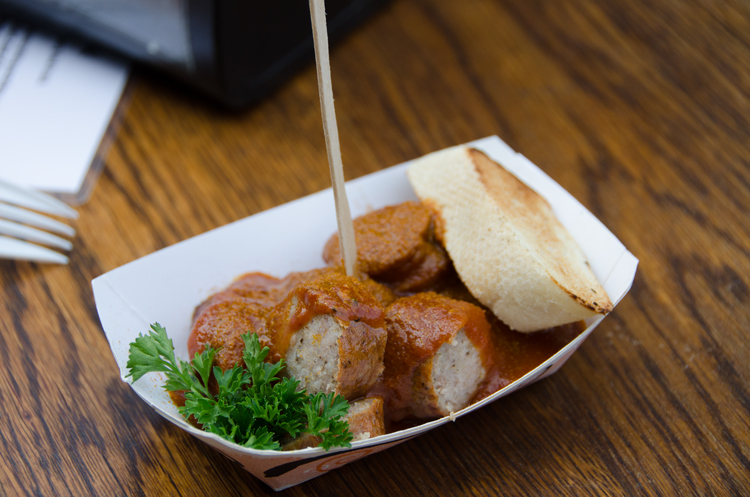 There are numerous claims about who invented the first hamburger and when, and whether its origins are in the German city of Hamburg, or in America. What is certain though is that ever since Germany’s first restaurant with the golden arches was opened in Munich in 1971, food on the go has mostly crossed the Atlantic Ocean in one direction, eastwards. Today numerous American fast food chains populate the German fast food landscape.

For The Year of German-American Friendship that started last month, I took a closer look at the two most popular German foods on the go that have traveled the other way, from Germany to America, namely Currywurst and Döner. 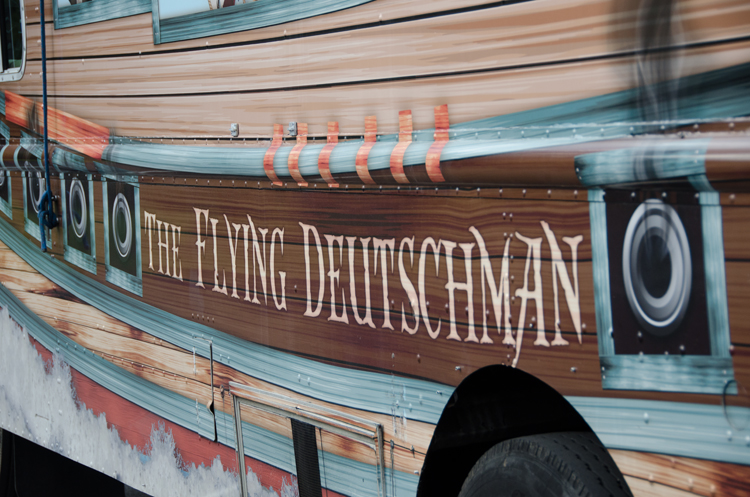 I’ve talked to the owners of two establishments who are both originally from Germany, The Flying Deutschman food truck on the East Coast, and BERLINS on the West Coast. That I do not refer to them as fast food restaurants is intentional – they both put great emphasis on quality, and the fact that everything they serve their hungry customers for a quick meal is prepared from scratch with fresh ingredients.

When Stirling Sowerby’s wife suggested he should open a restaurant, it wasn’t a new idea for him, on the contrary. He had been in the restaurant business during his entire career, as a chef and owner, first in Germany, and during the past 25 years in the United States. Five years ago. when his sister-in-law suggested the name The Flying Deutschman, the idea for a German food truck was born. 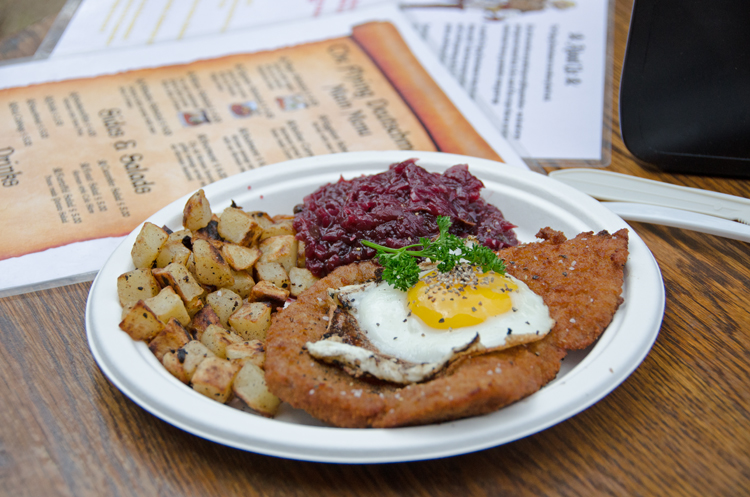 The food he dishes out from is colorfully painted food truck is what he grew up with in his native Germany and has been cooking for 30 years; many of the recipes are his grandmothers’. Stirling is a native of Bad Münder am Deister near Hannover and has a German mother and a British father. His mobile German restaurant, which tours the greater Philadelphia area, serves the same food as Stirling cooked in restaurants for decades. The menu includes Jaeger Schnitzel with mushroom sauce, Zigeuner Schnitzel with bell peppers (for more about this “politically incorrect” schnitzel, see my previous blog post), Schnitzel Holstein, a breaded schnitzel topped with a sunny side up egg, and Schnitzel Hawaii, a take on the popular 1970s dish, Toast Hawaii.

The Flying Deutschman also serves Currywurst – undoubtedly the German fast food. “Americans are used to sausages in a bun,” Stirling says. “Currywurst is different, it comes sliced and topped with abundant sauce. And I am not budging on that, I want my German food to be authentic.” 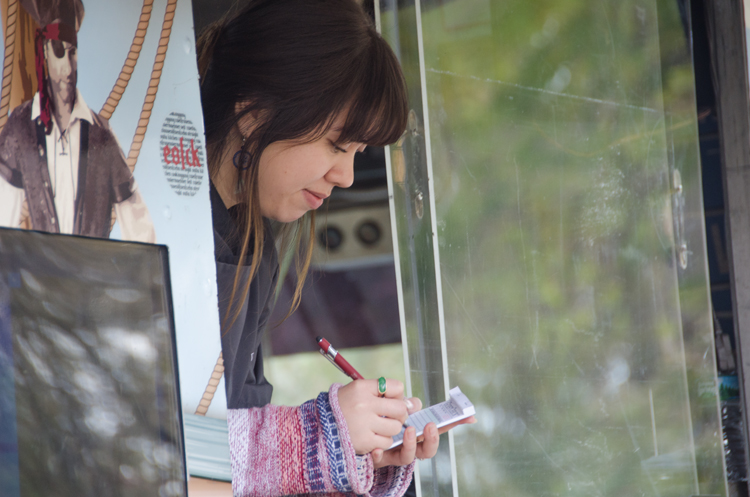 The mobile German restaurant is present at festivals, and can be booked for sit-down German dinners, corporate lunches and outings. There is also a mobile stage mounted on top of the truck that has room for a 4-person band.

Word has gotten around that there is authentic German food on wheels in the Philadelphia area. “We are the only authentic German food truck. A lot of the food that is called German in America is a travesty,” Sterling says. I wholeheartedly agree with him. Many foods labeled as German – and I am not talking Pennsylvania Dutch, which has its own distinct cuisine – are not remotely like the original. 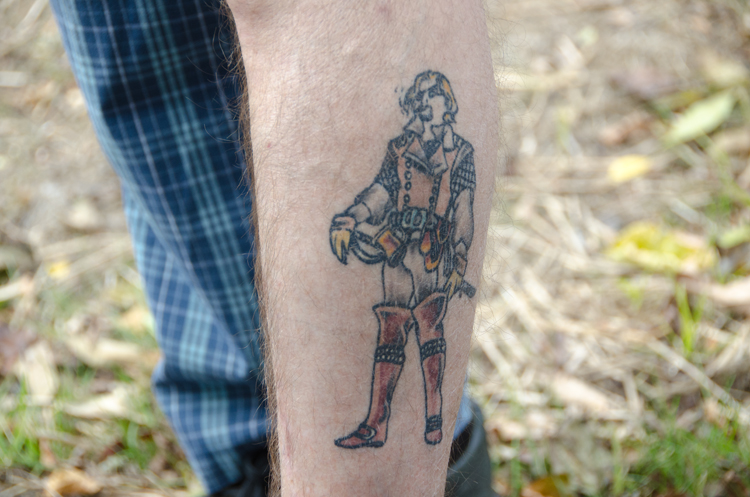 For Stirling, his food truck is more than a business, and his dedication is reflected in the Flying Dutchman tattoo on his calf. “I created The Flying Deutschman to share the amazing recipes that helped shape my life.” And he shares those freely. For those outside the Philadelphia area, or who want to recreate his dishes at home, Stirling has short videos online showing how his signature sauces such as Jäger Sauce and Curry Sauce are made.

I also spotted a video for a Schwenkgrill among his collection. This swing-type barbecue grill from the German region of Saarland is a trend that has not yet caught on in the country of Weber grills but who knows, it might come to America next.

The Flying Deutschman is definitely a place to keep on the radar. And, of course, have an authentic German bite when it’s nearby. 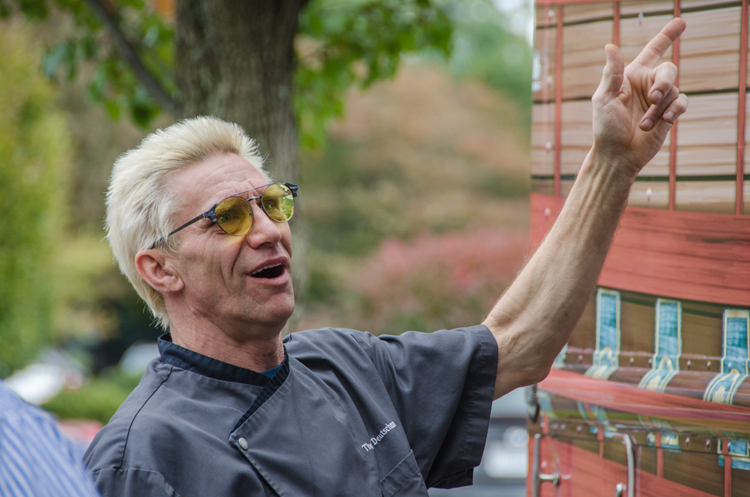 More than 2,800 miles away, at the other end of the United States, in Los Angeles, there is BERLINS – High Quality German Döner. I first heard about it through a German radio interview in the series “Living My Dream – Deutsche in Kalifornien”.

Simon Classen, an engineer from Wesel in the Ruhr region who moved with his family to California for a tech job, started BERLINS with his brother, Matthias. Wanting to have a second leg to stand on besides his career in corporate America, he looked around in Los Angeles wondering what was missing from the food landscape. And he found that there was a market niche for high-quality German döner.

Bear in mind that German döner is different from Turkish döner, just like deep-dish pizza in the US is different from Italian pizza. German Döner, which was introduced in 1972 in what was back then West Berlin by Kadir Nurman, a Turkish migrant worker. German döner is served in a flatbread, not on a plate, and with a variety of sauces. With 2.2 million döner sold daily in Germany it is the most popular German fast food.

Simon recruited his brother, a retail manager, for his enterprise. So neither of them had a background in hospitality or food. The first thing Matthias did was learn all about döner he could, right in the heartland of the German döner, in Berlin. Then, in 2013, he came to America.

The roughly two years between Matthias’ arrival in the US in 2013 and the opening of their first döner restaurant in April 2015 were hard work: finding a location, getting the equipment from Germany, finding the recipes from Germany, the high-quality meat and bread, which turned out to be especially challenging. “We did a lot of the installations ourselves and often slept at the restaurant, so we could start again early in the morning. I was still working at my regular job, and we had three small children. It was a tough time.” 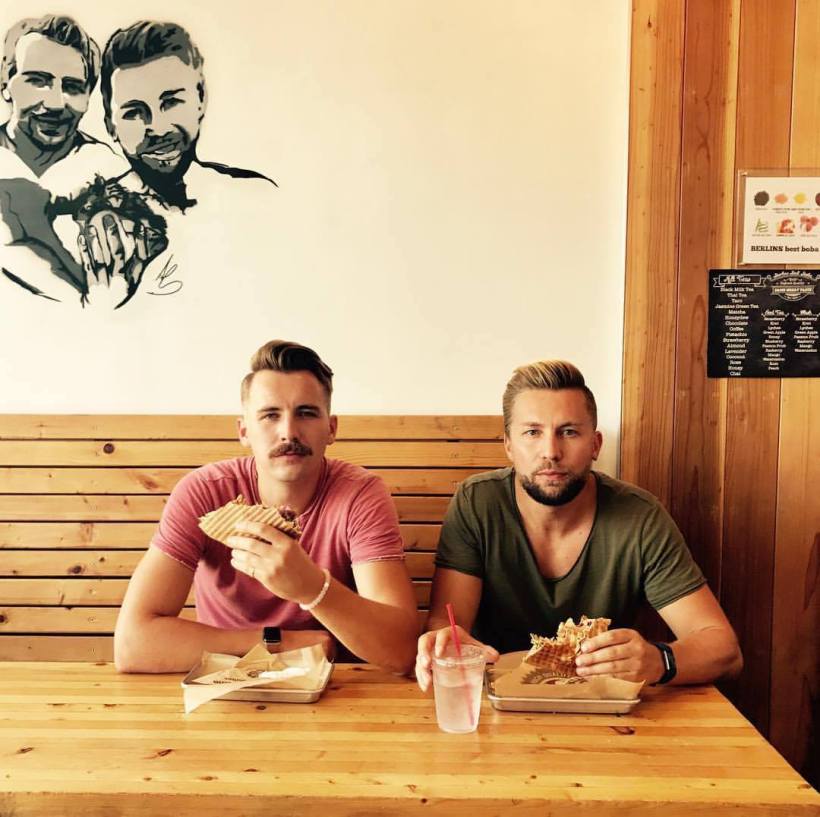 The brothers knew they were on the right track when they attended a 2-day festival and people stood in line for up to 1 hour, and some came back the next day. Germans, Turks and Americans with no prior German Döner experience to compare the product made in LA, started streaming into the restaurant. By word of mouth, the German consulate heard of the new döner in town and asked BERLINS to do the catering for the Day of German Unity on October 3, which they catered for the fourth time this year.

“Our main asset is quality,” Simon emphasizes. That means good meat, good bread, and only fresh ingredients. The meat, high-quality steak, is stacked and layered by hand, which is time-consuming and usually done in batches. The meat is then marinated, shock-frozen and thawed as needed. Unlike other döner, BERLINS does not use any ground meat. 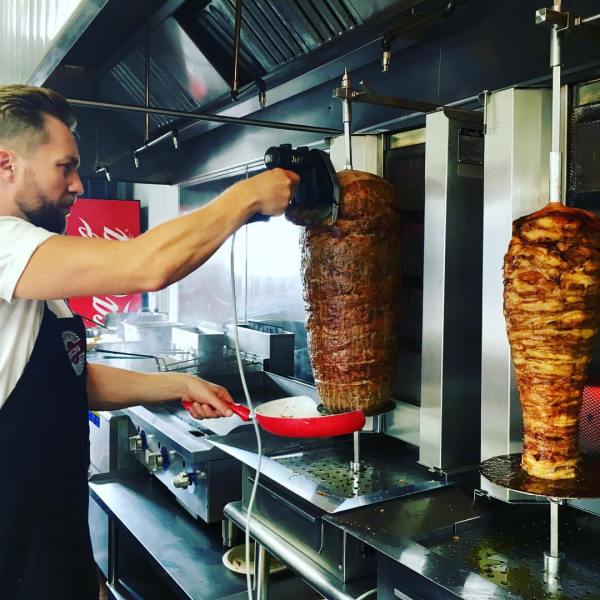 “We start the machine one hour before opening, and it’s a long roasting process before the meat is cooked all the way through,” Simon says. And it needs to be attended at all times, so it will cook evenly and won’t burn. Döner is definitely not a fast food. Once the meet is ready, it takes experience and skills to slice, or better, shave it. New staff gets started at the cash register, then moves up to assembly and plating, and if they do well, they might reach the holy grail of slicing the meat for the döner sandwiches, döner salads döner wraps and other döner variations on the menu.

To hear from Simon that finding good bread was not surprising to me. The search for bread that lives up to German standard is a lifelong quest for anyone who moves from America to Germany. Simon and his brother found the bread from Armenian bakers the best. And since the Armenian community is LA is one of the largest in the world after Armenia, the bread supply should be secured as BERLINS grows.

There are currently three locations – Beverly Hills, Venice, and Encino – and the fourth location is scheduled to open later this year in Koreatown. 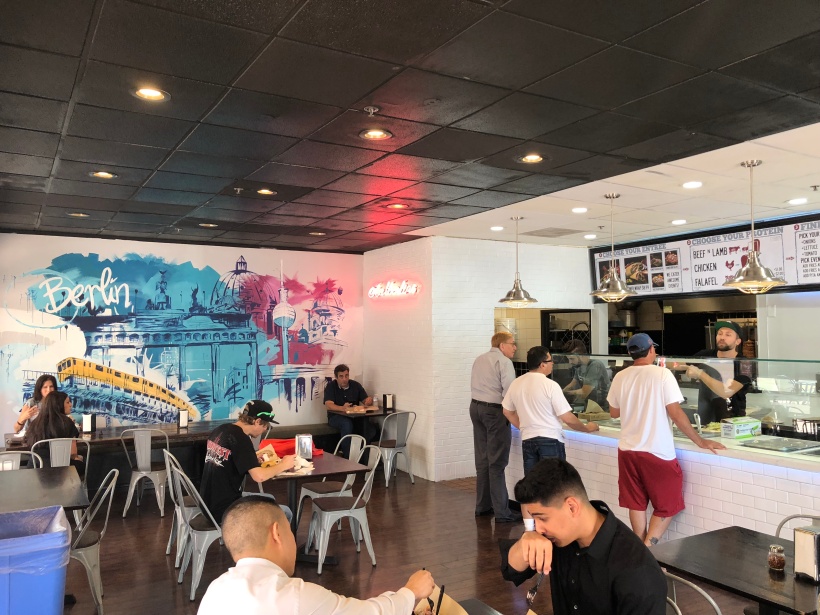 “We have been approached by companies who set up franchises. That is not something we want to do.” Simon says. “I’ve have seen other chains grow too quickly, and the quality went down the drain. We want to keep control and maintain our quality, even if that means slow growth.”

Besides the meat, bread and veggies used for döner, this German-American enterprise with a Turkish base contains a good portion of two very German ingredients: caution and thoroughness. As I live at the other end of the United States, I did not get the chance to try the döner yet, but I know that those two ingredients are essential ingredients to a recipe for success. 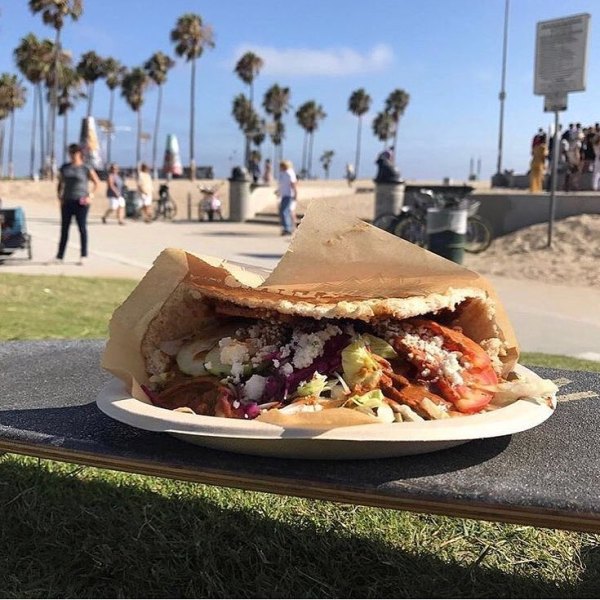 3 thoughts on “German food on the go, made in USA”