Once in a while, someone asks me whether I ever thought of turning my love of German cuisine into an eatery of some sort. My usual answer is a clear “no” – much better for me to cook for friends and family and write about my passion than being exposed to the grind of running a food business.

Though after I read Susanne Bacon’ latest novel Delicate Dreams, which centers around a German deli, I realized that if I were her main character, Dottie Dolan, I would have maybe dived into an enterprise like that after all. Yet Dottie lives in an ideal world, a quaint little town at the Pacific Coast. It has a lively main street, and despite a few villains popping in and out of the plot, all the businesses work together, whether it’s the French restaurant next door or the fashion boutique one block away. And locals and tourists alike just keep streaming into Dottie’s shop.

I wanted to find out from Susanne, a native of Stuttgart, about her real life in America and what led her to write Delicate Dreams.

And I made the German Potato Soup from Susanne’s book, which was excellent (recipe is below).

What brought you to the United States?

In 2007 I had met my husband in Germany. After a couple of years we found that a long-distance relationship – he was living in England at the time – should rather become a life together. When his career landed him in the South Puget Sound area, we moved there in 2010.

How did you get the idea for a novel that centers around a German deli?

I have always had an intense love for food, cooking, and eating. After moving here, I wanted to grow roots where I am living. Combining my native language with my love for food seemed to be the thing. So I applied with a beautiful German store, Hess Bakery & Deli in Lakewood, Washington. I had no idea then that it would inspire me to write a novel. Unfortunately, a contact allergy on my hands cut my time at the German deli short. Maybe, subconsciously, I wanted to make my dream about working in a German deli last a little longer in writing about one.

The main character, Dottie Dolan, is a native German who met her husband when he was stationed in Germany. She followed him to the United States and they moved around a lot. The book starts out with Dottie recently widowed when she is only in her mid-forties, in a beautiful town but where Dottie does not have any roots or a network of friends and family. Do you think that is typical only for military wives, or is this something anyone who emigrates from Germany without family can relate to?

I think any immigrant relates to the feeling of isolation when there is no family around except their spouse who might be off to work most of the time. Probably even more so when they are an immigrant moving around with an active military member. It all comes down to your ability to integrate and assimilate. Dottie might be an extreme case, being an immigrant, being “retired” from her military community, having just moved, and being freshly widowed. As she knows that nobody has been waiting for her specifically, she is the one who has to make the move. As she has a immigrant background and a gift for food, she is able to turn both to her advantage. Basically, that is the history of a lot of ethnic businesses anywhere.

The German Deli in your book is a success. People go there to buy cold cuts and pretzels, foods they already know and appreciate but they are also open to new things – in one chapter Dottie explains to a customer how to fry white sausage (Weißwurst), which was a new way of preparation for me. Can you tell me about that? And how did you experience the attitude of Americans towards German food when you worked at a German deli yourself – are Americans open to try new things, or do they stick to the usual suspects, bread, pretzels, sausage, beer?

A lot of customers come to the deli where I worked to relive their German experience. There are also German immigrants among the customers who return regularly. Many customers have a military background, and they were stationed in Germany at one time. People who come to the German deli are willing to try German products whether they have had them before or not. They ask a lot of questions about food preparation, too. They become reminiscent of their traditional family or regional recipes and exchange them while waiting their turn at the deli counter or at the cash register.

And yes, one of my family recipes is frying white sausages in butter after rolling them in flour. That’s a Silesian variation of preparing Weißwurst. And, of course, I always also told the customers about Frankonian “Blaue Zipfel”, which are sausages heated up in a vinegary marinade with onions, with sauerkraut, or simply in hot water. 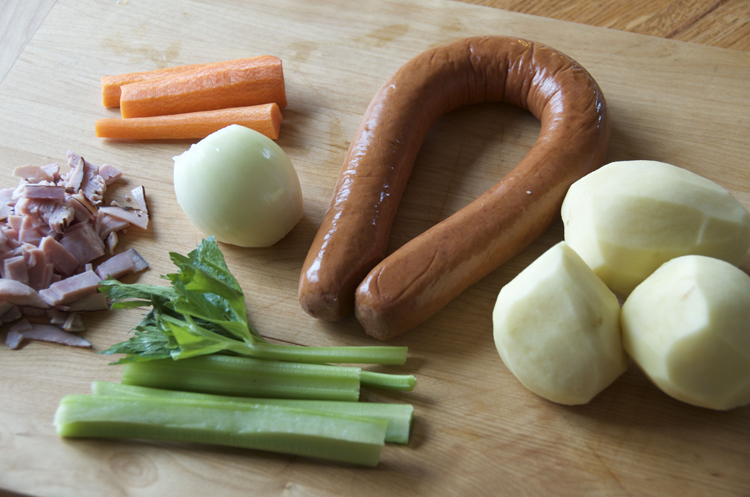 The products sold at Dottie’s Deli read like a list of food cravings compiled by German expats and people who have lived in Germany. Do you have a favorite – the one food that you truly miss living in the United States?

The first year after I moved to the United States, I was often appalled by monotony of cold cuts in US supermarkets. Basically, it seems to be yard after yard of sliced ham and turkey breast. Bread is another sad issue. Fortunately there seems to be a growing awareness for food variety and quality that has been related by cooking shows on TV and wonderful books in recent years. Being known for its amazing ethnical mix and its explorative mindset, Western Washington has responded to that in great ways.

Offhand, I cannot even think of a single German food item I crave and cannot get here or at least substitute with something else. I’ve been trying foods from all over the place, and I keep trying new recipes constantly. I couldn’t even say whether that is assimilation or curiosity … but it’s definitely part of being a foodie.

1. Cut 3 of the potatoes into chunks and put them in a saucepan with the chicken broth. Bring to a boil, cover and reduce the heat to medium. Cook until the potatoes are very soft, about 15 minutes. Mash the potatoes in the broth to a soupy mix.

3. Dice the last potato and add it to the pot with 2 cups (500 ml) water and the marjoram. Cover and cook over low to medium heat for 10 minutes, or until the potato is very soft. Keep stirring, as the potato tends to settle at the bottom and burn.

4. Just before serving, add the sausage and reheat thoroughly. Season to taste with salt and pepper and serve.

Susanne’s (Dottie’s) tip: The soup gets a creamy consistency when you let it sit for an hour our two. Keep stirring the soup while reheating to prevent it from scorching.

9 thoughts on “The German dream deli”