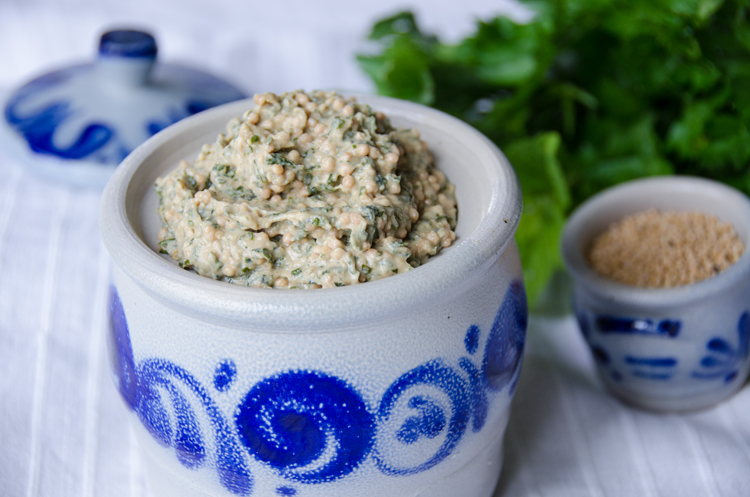 German slang has a funny word for all those trinkets whose sole purpose seems to be to accumulate dust: Staubfänger (literally “dust catchers”). While we have a bunch of those around our house (who doesn’t?), only a few give away my German background. I do not collect beer steins or Hummel figurines, nor I do not have a cuckoo clock.

On thing I do like having is the blue-and-grey ceramics called Westerwälder Steinzeug. It has the true ring of home to me. When I moved to the United States, I brought with me an apple wine pitcher (called Bembel in Frankfurt vernacular). There is no apple wine here so I use it as a vase. 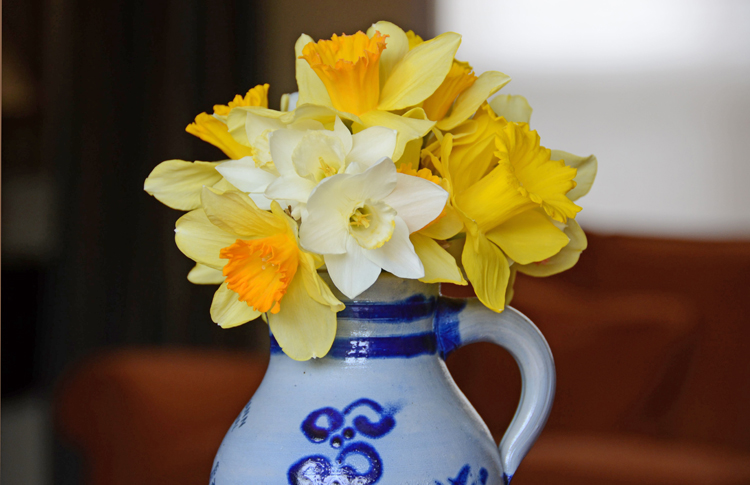 The pottery comes from the Westerwald, a mountain range located east of the Rhine valley about 90 minutes northwest from Frankfurt. The beginnings of pottery production in the Westerwald go back to the 15th century. It peaked in the 18th and 19th centuries, when it was exported all over the world. The area is also known as Kannenbäckerland – “jug bakers’ country” – a name that sounds a bit out of a Grimm’s fairytale.

The light to mid-grey paint tones on the surface of the pottery is treated with a salt glaze, which gives its characteristic orange peel effect. That the painted details are predominantly cobalt blue is less an artistic expression than due to the fact that cobalt blue is one of only two colors that could withstand the high-firing temperatures of the stoneware kilns. 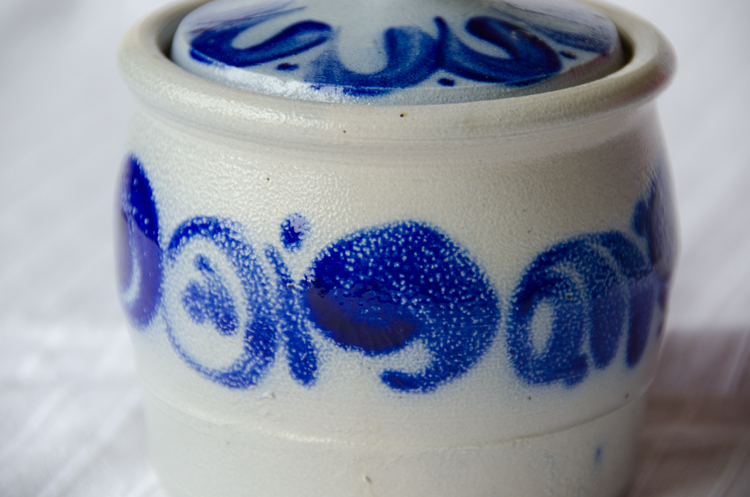 Most of the pottery are everyday objects, and quite large: jars, crocks, jugs, mugs, chamber pots, and such. With the exception of the chamber pot I could kick myself that I did not bring more of the pottery to the United States when I moved all my stuff by ocean freight in 2001.

But I did get my hands on some pieces after all. A couple of years ago my parents, who had been living not far from the pottery town of Höhr-Grenzhausen, moved north to Westphalia where my mother is from. And in the process of the move a large collection of Westerwälder Steinzeug emerged. My father, who to my mother’s dismay loves flea markets and bargains and has the habit of filling every corner of the house, had once bought the entire inventory of a local restaurant that was closing.

On my last visit to my parents’ I could not believe my eyes when my father took me to the garage and produced object after object, still wrapped in yellowed newspaper. Now these objects aren’t worth a lot, the real collectibles are the multicolored pottery. Still, it made me very happy, especially when smaller objects appeared, things that I could easily stuff into my luggage.

I happily returned to the United States with a few pieces of small Westerwald ceramics, including a mustard pot. I promised to take some more on my next trip. My mother was happy too because it means having fewer “Staubfänger” around!

Whenever I am in the Sachsenhausen neighborhood of Frankfurt where I grew up, I always loop by the Frankfurter Senfgalerie, a store that specializes in mustard of every imaginable kind and flavor.

But just like with the Westerwald ceramics, my eyes can be only as big as my suitcase, so I have to choose wisely. Last time I bought a tiny jar of Grüne Soße Senf, a mustard with the seven herbs that go into Frankfurt’s famous seven herb sauce. It was excellent and it did not last long. Of course I wanted more.

My next trip to Germany is months away. Since I have all those wonderful fresh herbs in the garden I thought, why not try to make my own?

After familiarizing myself with how to make mustard on Hunter Angler Gardener Cook, I recreated my own Grüne Soße Senf.  It contains about 14% herbs in weight, which is the original formula. The original mustard is shinier and smoother because it also contains safflower oil. I skipped that as well as the citric acid as a preservative, since we are going to eat it within the next month anyway, and mustard does not really need a preservative.

I also tweaked the herb mix a bit: I did not have any alfalfa, and I substituted lemon balm for pimpinelle (salad burnet), and tarragon for chervil. But I did not use any dill because, as I wrote in a previous blog post, dill has no business being in Grüne Soße!

1. Grind the whole mustard seeds coarsely for a few seconds in a spice or coffee grinder.

2. Put the seeds in the bowl of a food processor. Add the mustard powder and beer and stir well. Let it sit for 15 minutes, then add the vinegar, salt and honey. Process to the desired smoothness.

3. Pour the mustard into a container with a tight-fitting lid and let it sit in refrigerator for 1 day. Taste the mustard the next day. If your mustard is too fiery for your taste (mine was) you can temper it down by heating it slowly in a small saucepan over low heat until it thickens. Make sure to stir constantly and do not let it burn. Let cool completely.

4. Wash the herbs and dry them thoroughly with paper towels. Chop them very finely and add them to the mustard. Still well to combine. Let the mustard sit for at least another day before using. If it is too thick, add a few tablespoons boiling water if the mustard is still a bit hot, or cold untreated tap water or bottled water. Store in the refrigerator and use within one month.

8 thoughts on “Hominess in grey and blue”