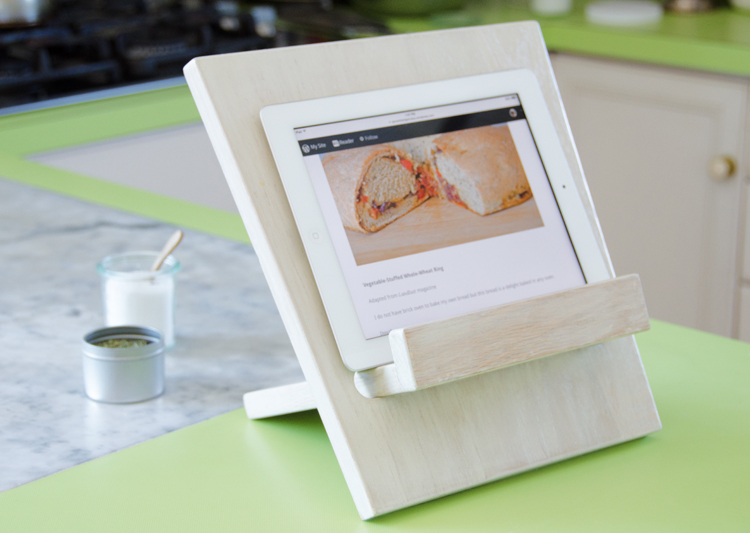 Cookbook and tablet holder from Landlust

In this day and age of online reading it does not happen too often that I get excited about what’s in the mail. However, when an almost two-pound magazine from Germany arrives, my husband, who on most days fetches our mail from the post office in the village four miles away, calls out, “Your Landlust is here!” And although he does not read German he is often the first one to leaf through it.

Landlust, which means something like “Country Joy”, is a bimonthly magazine. “In the pages of Landlust,” The Economist wrote in 2011, “people take time not just to bake bread but to build their own ovens.” The magazine covers food and recipes (always seasonal and locally grown or sourced), gardening, restoring old homes, reviving old crafts, farm animals, wildlife and other aspects of country life.

With more than a million copies sold bimonthly, the magazine, which celebrates its tenth anniversary this year, has accomplished the unlikely feat of thriving when so many other printed periodicals are struggling. Landlust ranks sixth of all the magazines sold at newsstands in Germany. Its publisher, the agricultural trade publisher Landwirtschaftsverlag, was not exactly known for putting out hip, trendy consumer magazines before Landlust.

Success breeds imitations. Several other high-gloss magazines followed in the footsteps of Landlust, with similar titles such as Liebes Land and Mein schönes Land.

Landlust appeals not only to people who actually live in the country but also to those who dream of an idyllic country life. I have spotted it on the coffee table of friends living in an apartment in Berlin. There are also critics who roll their eyes about what The Economist describes as a formula that mixes escapism with authenticity. 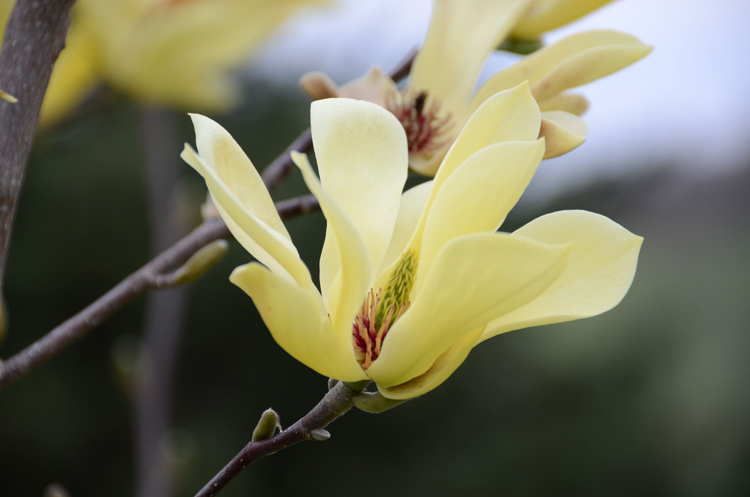 May bloom of our magnolia

It might sound strange for someone who makes a living mediating between German and English: Reading the articles about gardening in the magazine helps me catch up on my native language because I only became a gardener when I moved to the countryside in the United States. I realized that I ignored most of the plant names and gardening terminology in German that I have learned in English. Now, in the winter when I longlingly admire the fat, downy buds of our yellow magnolia that will open to the most gorgeous flowers in May, I know the proper word for them in German (Knospenschuppen). 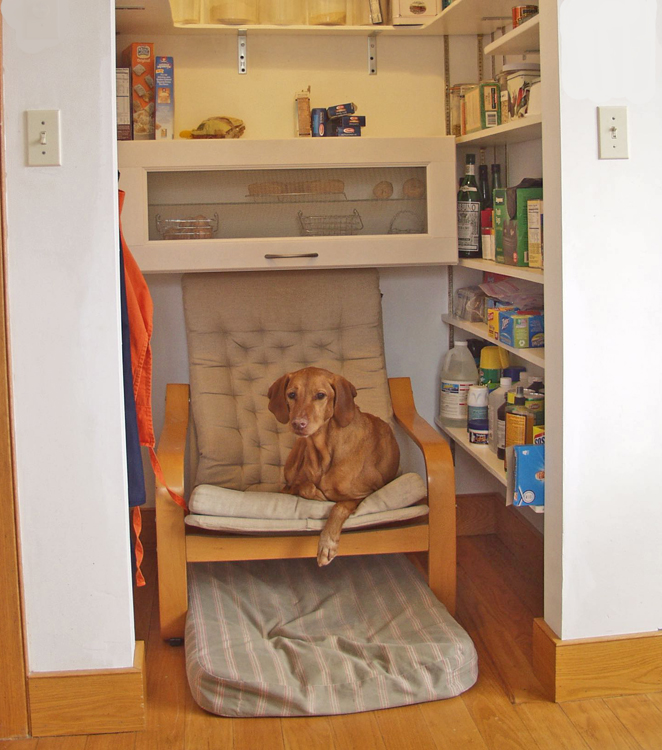 Ikea cabinet modified into a “Fliegenschrank”

And Landlust brings back things from my childhood in Germany that I had completely forgotten. Sure, some of the old-fashioned customs featured in Landlust are rather weird. I shook my head about how to crochet a bike saddle cover, which for me belongs to the same category as the crocheted cover for a toilet paper roll that appeared in the 1960s.

Mostly however the magazine contains lots of worthy do-it-yourself ideas. For example, the kitchen cabinet with a screen door called Fliegenschrank (literally a “fly cabinet”). It was just like the one I remember from my grandmother and my great-aunts. When we remodeled the pantry a few years ago we bought a single kitchen cabinet unit from Ikea and replaced its glass door with a fine screen. Not only does it keep the fruit flies out, it is also the place where baked goods can cool without our dog, a notorious kitchen counter climber and thief, is able to reach them.

In a recent issue of the magazine an ingenious wooden cookbook and tablet holder caught my attention. I asked a local woodworker to make one for me from red oak. My husband then stained it antique white the way I wanted it.

Another one of my prized possessions in the kitchen is a pepper mill made of apple wood. It comes from Hergen Böttcher, a woodworker in the north German city of Bremen who was also featured in Landlust. He only uses local woods and I love the idea that I each time I crank the mill I am touching a piece of an apple tree that once grew in Germany.

I have lived in the country for more than a decade and know that country life is not bucolic and serene. There is nothing wrong though with prettying it up and making kitchen routines more convenient with some great new ideas. 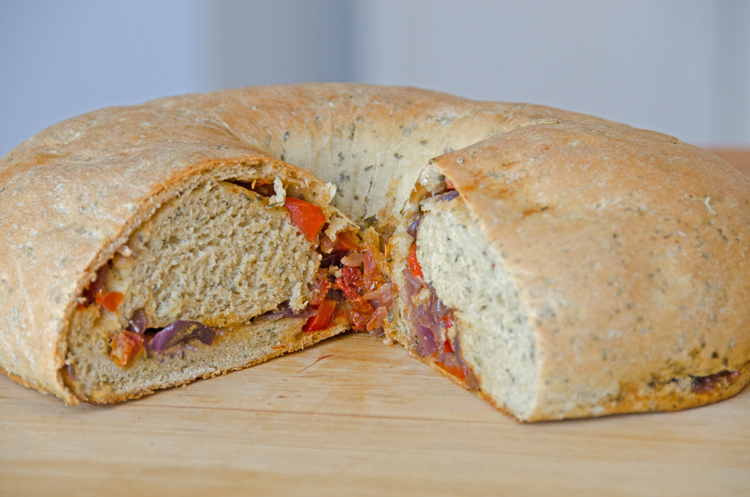 I do not have a brick oven to bake my own bread (yet, I am still lobbying for it) but this bread is a delight baked in any oven.

1 tablespoon Herbes de Provence (I make my own mix from homegrown herbs, see the recipe on my gardening blog)

1. Mix the water with the yeast and let stand for a few minutes until it starts to foam.

2. In a large bowl mix the flours with the salt and Herbes de Provence. Add the yeast mixture and knead to a smooth dough using your hands or the dough hook of an electric mixer. The dough should be slightly tacky; add more water a tablespoon at a time as needed.

4. In the meantime, prepare the stuffing. Heat the olive oil in a large pan. Cook the onions over low heat until soft and translucent; they should not brown. Add the peppers, sundried tomatoes and herbs and cook, uncovered, until the peppers are soft and the liquid has thickened, about 15 minutes. Set aside to cool.

6. Fold the two short ends over towards the center, then roll up the dough from the long side. Pinch the seam together to seal.

7. Place the roll seam side down on a lightly greased baking sheet. Shape in into a circle, taking care not to tear the tough. Where to two ends join, pinch the dough together top to bottom to seal. Gently mold it to give it a neater, rounder appearance. Cover and let rise for 30 minutes.

8. Preheat the oven to 400 degrees F (200 degrees C). Bake in the preheated oven for 30 to 40 minutes, or until the ring is lightly browned and the bottom sounds hollow when you tap on it.

9. Transfer to a cake rack and let cool completely before cutting.

One thought on “Idyll by mail”