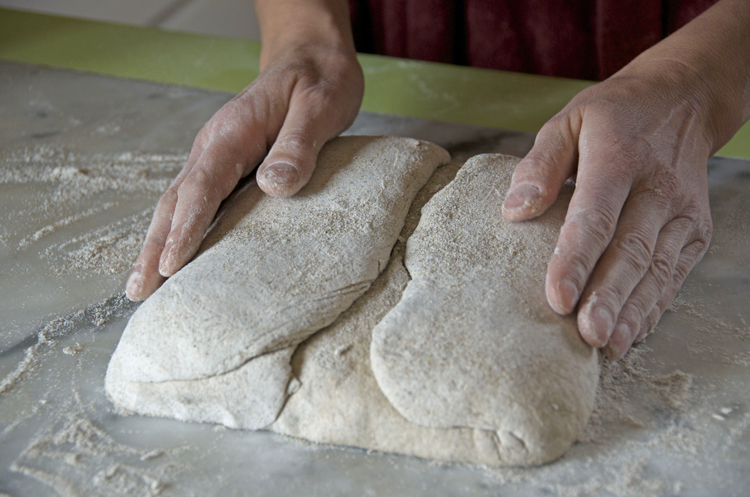 “Whenever I go out to eat at a place with great bread,” writes German-born, Los-Angeles-based chef Hans Röckenwagner about his Sourdough Roggen Brot, I always stash a little nub by my napkin so it’s safe from the servers dutifully cleaning up the table. No matter what I’ve had for dinner or dessert, I must end my meal with one last bite of bread.”

I don’t do exactly that but I am equally obsessed with real, good bread. All of my German expat friends are too. The love for good bread must be in our genes, no matter how far away from Germany we live, or how long we’ve been away. 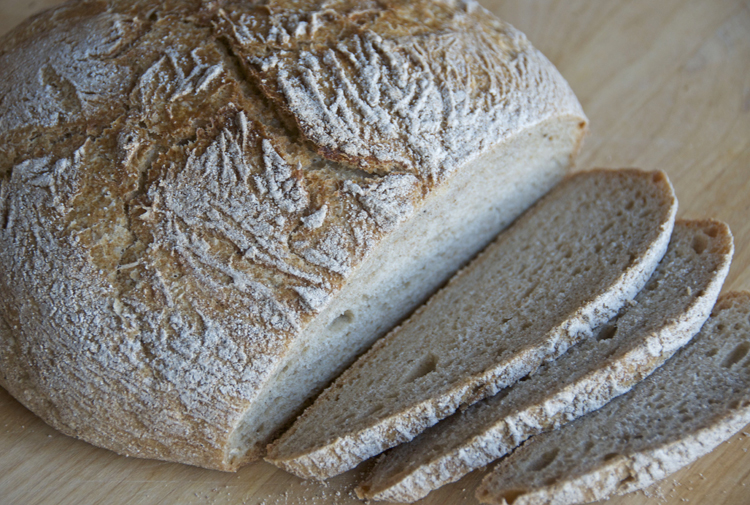 Hans Röckenwagner has lived in the United States since the late 1970s. He switched from cooking in his own restaurants to owning and running the wholesale bakery Röckenwagner Bakery. The Sourdough Roggen Brot is one of the recipes I tested from Hans’ new book, Das Cookbook – German Cooking… California Style.

The book is populated with German references, from chapter headings such as Guten Morgen, Stammtisch, Mittagessen Hour, and Sprechen Sie Supper; to photos such as a group photo of garden gnomes and Mainzelmännchen figures, the iconic 1960s cartoon goblins of public TV channel ZDF.

However with the exception of several German baking recipes, and a few German classics such as Jägerschnitzel, the book mainly contains Hans’ own unique creations. I asked him whether baking is where he feels the most rooted in authentic German traditions, and his reply was, “Yes, that is where it comes out the most. That and the fact that holiday baking has such deep roots in German food.” 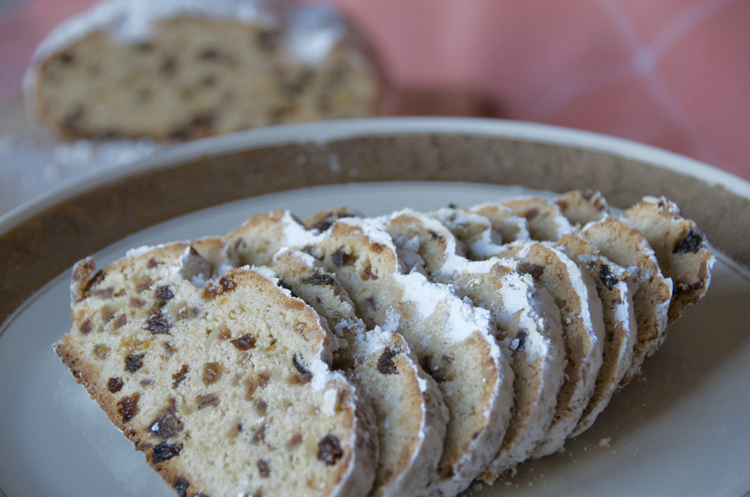 Das Cookbook also includes Hans’ recipes for classics from Germany’s neighbors France, Switzerland, and Austria, such as Brioche, Pain Perdu, Bircher Muesli, Rösti, Wiener Schnitzel, and Kaiserschmarrn. Does Hans see himself as a European as much as a German when it comes to food traditions? “Not to sound elitist or conceited but I consider myself a citizen of the world with strong middle European roots. This may also come from the fact that I grew up at walking distance from France and at biking distance from Switzerland. I love to travel and, with my wife working in New York, I lead a bi-coastal life.”

In Hans’ kitchen, Sauerbraten, the classic German beef pot roast, is transformed into a creation with monkfish because, he writes in his book, he “never really loved classic sauerbraten, as “it can get a little dry and heavy.” And, “With so many fresh ingredients available literally at our doorsteps, we can play around in the kitchen so much more today than people could in our grandparents’ day.” So does he think that some of the German classics like sauerbraten have somewhat outlived themselves because with the ingredients available today we can eat so much better than letting a roast sit in a spiced red wine marinade for several days? “No,” he says, “I don’t consider any of these outdated. The preparation of Sauerbraten was a way of preserving food just like smoking and pickling foods.”

As a chef, does he have observations about the food scene in Germany? “Food trends that you now see in the US such as “hoof to snout” and “farm to table” have been practiced in Germany for decades. Chefs in Germany have been rediscovering their own roots and have been lightening up German staples with new techniques and ingredient selections. A perfect example of this would be Tim Raue who opened a very good German restaurant in Berlin called La Soupe Populaire.”

I often get puzzled looks when I tell friends and family in Germany that in the United States there is a hype about kale (Grünkohl), yet the way it is prepared is much different from Germany where kale is usually cooked for a long time with lots of meat and sausages. Hans’ Warm Brussels Sprouts and Kale Salad with Blue Cheese Dressing reflects the very different American use of the vegetable. Has he received any feedback from Germany to his Californian take on traditional “German” ingredients like kale? “On rare occasions,” Hans says, “I cook at my sister’s restaurant in Germany. I find the clientele to be very open-minded and susceptive of different interpretations on their classics. Once some 15 years ago I made a Sushi-grade Tuna Macadamia Schnitzel with Mango Salsa. The fish was breaded in coarsely chopped macadamia nuts and seared rare. The Schnitzel was then sliced exposing the rareness of the meat and topped with a vibrant mango salsa. They are still asking me to make it again and again.” 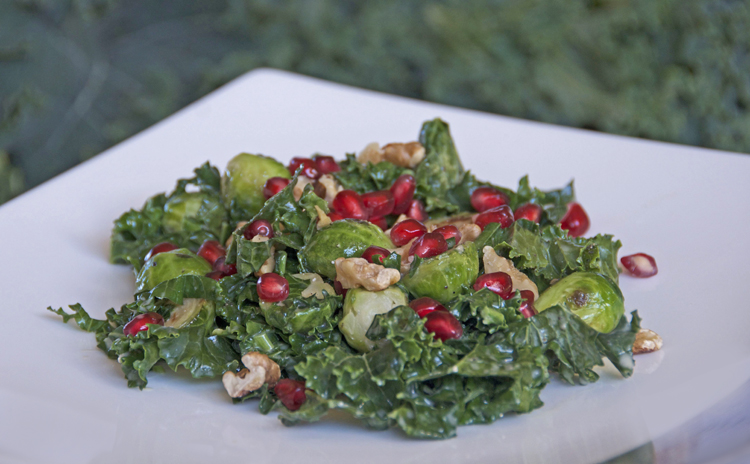 For Hans’ Sourdough Roggen Brot I used my own sourdough starter simply because I always have it ready. The bread is excellent but it is not a recipe that as a self-taught home baker I would have been able to pull off at the beginning of my bread-baking “career” – in other words, not suitable for beginners.

Hans’ twist on the classic German Christmas Stollen is the addition of dates, which add sweetness. Since otherwise the dough contains only a small amount of sugar, the final result is well balanced. He also does away with the traditional rule of letting Stollen age several weeks and lets you cut it after 48 hours. I find Stollen tastes great either way, and my theory is that most Stollen recipes make two loaves for that very reason: one for eating after a couple of days (because who wants to wait that long?), the other one for ageing.

Kale and Brussels sprouts are both popular winter vegetables in Germany, however they are never incorporated into the same dish. Here they are combined, with great results. I will make that salad again for Christmas, and not just for the color!

Instead of pine nuts, I used toasted walnuts, my standard substitute when I do not have top-quality European pine nuts.

1½ pounds Brussels sprouts, cut in half if small, quartered if large

1. In a large sauté pan, heat olive oil over medium-high heat. Add Brussels sprouts and sauté until beginning to brown, stirring occasionally, about 5 minutes. Add 1 cup water, bring to a simmer, and cook until Brussels sprouts are crisp-tender, 2 to 3 minutes if sprouts are very small, up to 6 to 8 minutes if larger. Add cheese, stir to melt, and then add kale. Continue to cook until kale has just wilted, about 30 seconds. Stir in lemon juice.

2. Remove pan from heat and season with salt, pepper, and additional lemon juice to taste. Sprinkle with pine nuts and pomegranate seeds, if desired, and serve immediately.

Though challah is one of my staples, I found my first try at six-strand braids quite challenging. I did not get the hang of it yet, hence the two mini challahs from the leftovers. With #blacksesame from @burmaspice #challah #yeastedbread #yeastbraid #blacksesameseeds #snowdaybaking