My knowledge of German history is piecemeal. This is not due to lack of interest. In my high-school days the State of Hessia had done away with history as an independent subject of study and blended it with geography, political science, and social studies. A court later ruled that the State Government had to revoke its curriculum – too late for me when I graduated in 1984.

The first time I learned something about the Prussian King Frederick II, also known as Frederick the Great, was when I was doing research for the first edition of Spoonfuls of Germany ten years ago. Frederick II introduced Germans to potatoes, or actually, forced them to grow and eat the then-uncommon tubers. During his reign, he issued 15 “Potato orders”, the first one in 1746 after a famine in Pomerania. However, Germans did not take to potatoes until almost a century later, and the king himself did not seem to have been particularly fond of potatoes either. According to Antonia Humm, the historian who curated an exhibition on Frederick the Great and potatoes in 2012 – the king’s 300th birthday – not a single potato dish was found on the royal menu.

The king, nicknamed “Old Fritz” (Der Alte Fritz), has always been a highly controversial figure. The title of another exhibition on the occasion of the 300th anniversary of his birth last year summed it up well: “Frederick the Great – respected, revered, reviled”. Some think that his military leadership, his tactical genius, and his efficient organization of the Prussian armies paved the way for the Nazis. Others viewed in him a disguised Romantic, or the first and only intellectual on a European throne. He spoke several languages, liked to philosophize (he corresponded with Voltaire for many years), composed music and patronized the arts.

The personal history of the Prussian ruler is tragic. At the age of 18, his father made him watch the execution of his closest friend, or his lover, according to some, as Frederick is said to have been homosexual. Hans Hermann von Katte had helped the crown prince, nine years his junior, run away from his despotic, authoritarian father, Frederick William II, also known as the “Soldier King”. The young Frederick was later forced by his family to marry a princess; the marriage was childless. After fighting numerous wars and catapulting Prussia into the circle of the major European powers of the eighteenth century, Frederick II spent his old age in complete loneliness.

There are many unsubstantiated stories about Frederick the Great. One of them is that his favorite dessert was lemon mousse. For the longest time I could not figure out how this came about until I read that at Sanssouci, the summer palace in Potsdam that the king built to withdraw from the world with his dogs, hundreds of lemon trees were grown in greenhouses. Fact or fiction, it is a nice story and I like to think that the gruff king found pleasure in eating lemon mousse.

On my recent trip to Berlin, a visit to Sanssouci was at the top of my list. But after a week of sunny weather, on the day when friends drove with me out to Potsdam it was raining relentlessly, so no meandering among the famous terraced vineyard, and no glimpse of lemon trees, if there are any. Instead, we walked through Potsdam’s charming Dutch Quarter (Holländisches Viertel), commissioned by the father of Frederick II to make Dutch craftsmen feel at home in Prussia. Trying to stay dry, we browsed the artsy shops that now occupy the ground floors of many of the red brick buildings, and skipped the palace and its gardens altogether.

Hopefully I will get to see Sanssouci on my next visit. In the meantime, I made lemon mousse at home, with the little chocolate chef I bought in the Dutch Quarter looking on. 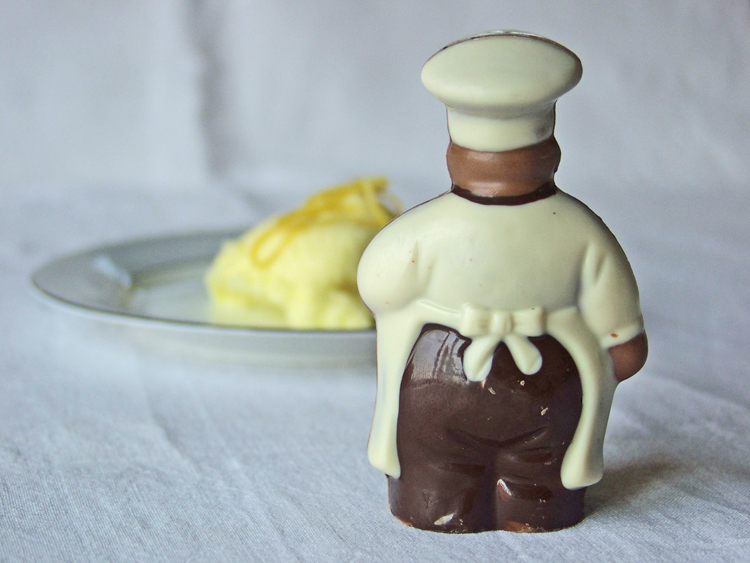 1. Beat the egg yolks with the sugar until light in color and foamy. Stir in the lemon juice.

2. Fill a small saucepan two-thirds full with water and bring to a simmer. Mix the gelatin with 3 tablespoons cold water and put it in small metal bowl, or a large metal ladle. Place it in the simmering water and hold onto it very carefully until the gelatin is completely dissolved, stirring constantly to avoid lumps. Make sure that no water from the pan gets into the bowl, or the ladle.

4. Beat the egg whites with a pinch of salt until they stand in stiff peaks. When the gelatin starts to set, whisk in a quarter of the egg whites, then fold in the rest.

5. Pour the mousse into a large glass bowl or individual dessert bowls. Chill for several hours, or until set.

5 thoughts on “The king’s dessert”