During the first couple of years after I moved to rural northeast Pennsylvania in the early 2000’s, I commuted to New York City once a week. The bus made a stop in downtown Easton. I was new to the area and still in exploration mode. What I saw then of Easton from a bus window did not pique my curiosity. The streets were deserted, the storefronts empty or boarded up, the buildings run down. It looked like an abandoned movie set from PBS Masterpiece.

Easton was not the only city in the Lehigh Valley with a dying downtown. Main Street in Bethlehem looked just about the same. My being from Germany where there is virtually no inner city or town, often not a single block where buildings had not been destroyed in World War II, I have always found the sight in America of entire rows of intact historic buildings remarkable.

In the early 2000’s all of Lehigh Valley seemed to live up to its bad rap from Billy Joel’s song “Allentown”. Before my departing New York City for Pennsylvania a colleague gave me the CD. Over the years I talked to numerous people who were given the same gift when they moved to the Lehigh Valley. 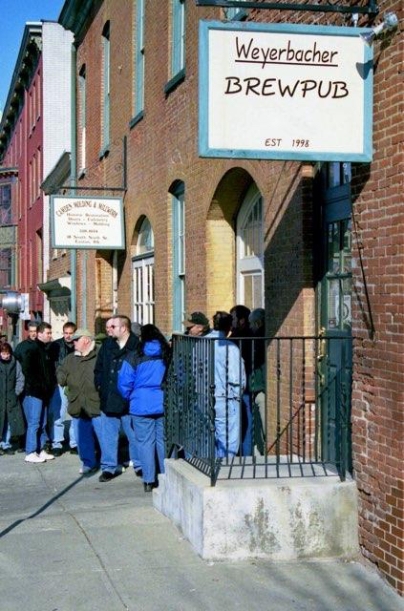 During my first few years here I mainly stuck to the countryside where I lived. The Lehigh Valley held little attraction. It was a logistics destination, such as for grocery shopping and visits to doctors. For dining out, we would go elsewhere, Philadelphia or New York City.

Then things changed. The Lehigh Valley evolved into a place that I would become proud of to show to friends visiting from elsewhere in the United States or abroad. As someone who had been closely following the emerging food scene in the Lehigh Valley, a pivotal moment for me was the tasting event Lehigh Valley Harvest in October 2013. I had taken a friend from Washington D.C. along who marveled at the variety and quality of the food that was dished up by local food producers and farmers. The next event of its kind, Taste, in July 2016, was even bigger and better (there I did a presentation about on one of my favorite locavore topics, cooking global with locally sourced ingredients). My sister-in-law and niece from Connecticut joined me, and they were amazed by what the local food scene has to offer. That’s when I knew for sure that we had something quite special going on in the Lehigh Valley. The emergence of a new food landscape was fueled by an overall economic development and growth of the Lehigh Valley. There is a new video clip I love that conveys how the Lehigh Valley has risen like the phoenix from the ashes.

A lot of German heritage in the local mix

For my writing about German food, the Lehigh Valley and its surroundings with its omnipresent German heritage is a treasure trove. Many food producers and vendors have Germany ancestry, many with fascinating stories. One of the most intriguing is the story of Stefanie Angstadt of Valley Milkhouse, who sells her cheeses at Easton Farmers’ Market. By serendipity Stefanie, who grew up in New Jersey, landed a job at a farm in Oley Valley in Berks County, the very same farm where her ancestors, German immigrants, had settled in 1743. Stefanie’s cheesemaking business is located in another historic farmstead nearby.

In my recent blog posts I profiled a few of those local Pennsylvania family-owned food businesses whose owners have German ancestry: Castle Valley Mill in Doylestown, County Line Orchard in Kempton, and Miller Charm Farm and Butcher Shop in Tamaqua.

Naturally, among the many businesses founded by German immigrants in the Lehigh Valley were also several breweries. Easton in particular was a brew town. “Easton had the grain to brew beer, the canals to transport it, the labor to increase production and the market in the form of numerous taverns and hotels,” writes Rudy Miller in his article, “Did you know? Brewing in Easton, then and now”.

Bringing back Easton as a beer town

So when I talked to Dan Weirback, founder and owner of Weyerbacher Brewing in Easton, I was first and foremost interested in the German connection. Then the conversation took a different turn, which was just as fascinating.

Dan’s family came to America in the mid 1800’s. The original family name had been, like so many others, changed upon arrival at Ellis Island, and today there are more than nine different spellings. When Dan decided to turn beer brewing from being a hobby into a craft brewery in the early 1990’s, he decided to revert back to the original family name, Weyerbacher.

As a native of upper Bucks County, Dan knew Easton from accompanying his mother to shopping trips when he was a child. “That was in the 1960’s and 1970’s. Before the malls replaced downtown shopping, it was a flourishing downtown with lots of shops. The sidewalks were crowded almost like in New York City,” Dan remembers. One of the department stores was Orr’s; this slideshow shows downtown Easton in the old days.

When Dan visited Easton again many years later, in the 1980’s, he was shocked seeing downtown so run down. And it wasn’t safe, the crime rate was up. What made Dan consider Easton as a location for his new business despite this were two things: renting a building was cheap, and an acquaintance who tipped him off about The Crayola Factory (now called The Crayola Experience) that would open its doors in 1996, and predicted that it would draw considerable crowds downtown.

And so it happened. Soon The Crayola Factory drew 300,000 visitors annually. What also helped, said Dan, was that the State Theater, within walking distance of the former livery stable where the Weyerbacher brewery and tap room were located, had been renovated and was under new management. Plus, the theater had a parking garage. “People felt safe again coming to downtown Easton at night. Police stepped up their presence, and volunteers from the State Theater were on the sidewalks with flashlights.”

Weyerbacher sold its first beer in 1995, and by the third of fourth year, Dan says, “the quality was really good.” Over the years, Weyerbacher has made several dozen different varieties, many of them seasonal. The label of Merry Monks, the bestselling beer, makes me feel transported to the German fairytale books of my childhood.

While many new microbreweries closed in the mid-1990’s, Weyerbacher continued to grow – so much that it moved to a new, bigger location across town, off Interstate 78, and opened a new satellite tap room in New Hope, Pennsylvania, this year.

The brewery might have moved across town but it is still very much part of downtown, with a presence at the Easton Farmers’ Market that can pride itself of being the longest operating farmers’ market in the United States.

If I can get away on a Saturday morning, that’s where you’ll find me. The horse-drawn carts that were used to haul the merchandise to the market are long gone. With so many historic buildings around Center Square it still feels like a historic movie set to me – but one that’s now populated with lots of real people and food from local sources. And that, of course, includes the occasional bratwurst!

To all the gardeners and hummus fans: Give edamame hummus a try, it is fabulous from homegrown edamame beans, I like it even better than the classic chickpea hummus. I am growing Sayamusume from @territorialseedcompany, very easy to grow and great for freezing, that’s why I can make this hummus when there’s almost three feet of snow on the ground. You can find my recipe on allrecipes.com, search for “edamame hummus”