Last April, Annette Ogrodnik-Corona, author of The New Ukrainian Cookbook, and I met for a German-Ukrainian cookout. Not long afterwards, Rinku Bhattacharya, author of The Bengali Five Spice Chronicles, also published by Hippocrene Books, contacted me. She liked the idea and wondered whether we could do something similar together. This developed into Hippocrene Books & Cooks, where five cookbook authors review each other’s books and blog about it.

In addition to Annette (her blog is called Refueling Your Fork in Sync with the Seasons) and Rinku (who blogs under Cooking in Westchester) there is Amy Riolo and her Egyptian cookbook Nile Style (her blog can be found here) and Skiz Fernando with Rice & Curry: Sri Lankan Home Cooking (who can be found under Rice and Curry). And myself, with Spoonfuls of Germany.

I was excited to receive The Bengali Five Spice Chronicles for review because I love Indian food. Unfortunately where I live I do not get to eat it very often. I remember the moment it dawned on me that if I wanted to eat anything remotely Indian, I would have to cook it myself. My husband and I were driving home and both hungry. “I am so in the mood for samosas right now,” I told him. Pointing to the strip malls with the usual fast food joints along the highway, he dryly said, “You are just in the right neighborhood for that.” Starting back then, I occasionally cooked simple Indian dishes such as vegetable curries, poryals, pakoras, and dals.

When I started flipping through Rinku’s book I realized how little I know about Bengal and its food. In that sense, The Bengali Five Spice Chronicles is more than a cookbook; it is also an introduction to a region. The book is packed with information that the author alternates with her personal stories. For example, in the chapter about rice as a staple of Bengali cuisine is a section entitled “Learning the ropes away from home”. Rinku recalls how she had no clue how to make rice when coming to the US for grad school, and receiving a tutorial in rice cooking by a fellow South Indian student.

One thing that I particularly like about the recipes is the flexibility with which the author handles the dishes. Many of the recipes are her adaptations of a Bengali dish, or it is a dish for which she was inspired by something she knew from home. She does not claim there is a gold standard and I think this flexibility encourages readers to make their own adaptations, which I did.

As a gardener, I also very much like the use of and references to homegrown produce because it shows that, contrary to widespread belief, ethnic cooking does not have to rely solely on ethnic groceries and specialty stores. You can indeed cook global and grow/buy local.

Rinku’s husband is the one who grows the vegetables but this did not prevent her from rooting Malabar spinach from an Indian grocery store in a pot. This headnote make me chuckle, “The vine looked so pretty, I did not want to use it; until I realized that it was a case of use it or lose it as it would never survive the New York winter.”

The only minor aspect I did not find practical about the book was that some recipes run over a right-hand and a left-hand page and thus require you to turn the page. This is especially inconvenient when you use a cookbook holder with a splatter shield like I do.

The vegetables from my garden were what eventually determined the two dishes I cooked for this post: Sweet and Sour Tomato and Ginger Chutney and Spicy Omelet Curry. The next Indian grocery store is more than an hour away so I chose recipes that use produce I have in the garden right now, and spices I have on hand. In her book Rinku suggests several easy substitutions, such as oil plus ground mustard instead of mustard oil, which I did not have.

I was especially curious about the chutney because I usually make chutney that is cooked for a long time, and with a considerable higher amount of sugar. The tomato chutney was fabulous. I found myself eating it by the spoonfuls as I was cleaning up. Luckily I had already set aside a bowl for the photo so that one was off-limits.

The Omelet Curry was also very good. I did not have the required Italian long peppers the recipe calls for, and I was reluctant to use more chilies because my husband does not like spicy food so I used red bell peppers and it tasted great.

I have flagged a bunch of other recipes I want to try – with vegetables from my garden, of course. 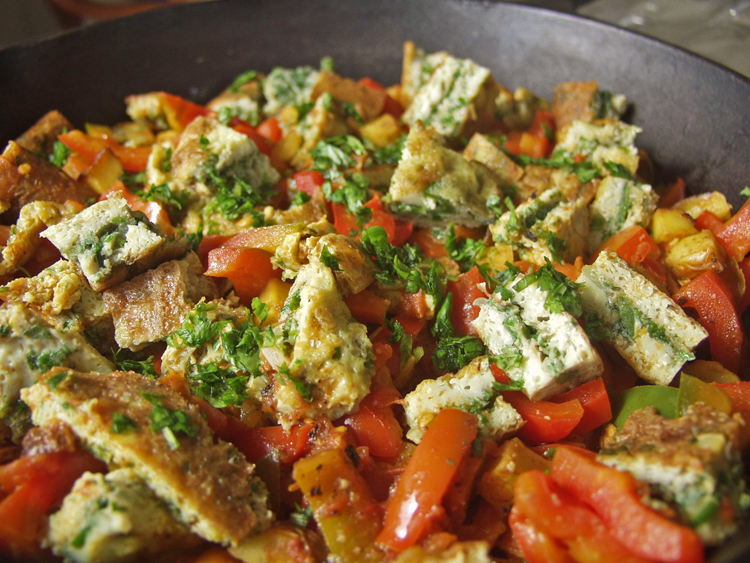 From The Bengali Five Spice Chronicles by Rinku Bhattacharya

8 to 10 baby fingerling potatoes, peeled – I did not peel them, as I used organic potatoes freshly dug from the garden

1 teaspoon cumin-coriander powder (made from equal amounts of cumin and coriander, lightly roasted and ground)

Heat half the oil in a frying pan. Beat the eggs wit the cilantro, green chilies, 1 teaspoon salt, and 2 to 3 tablespoons chopped onions. Pour the eggs into the frying pan and cook on low till set, about 7 to 8 minutes (this is done like a thin frittata). Carefully remove from the pan.

Add the remaining oil to the frying pan and heat. Add the potatoes and quickly brown on all sides. Add the remaining onions, remaining 1 teaspoon salt, turmeric, and ginger paste and turn the heat to low and cover and cook for about 5 minutes, till the potatoes are halfway done. Add in the tomatoes, mild chilies, and cumin-coriander powder and mix well and cook for 2 to 3 minutes until the tomatoes soften.

Cut the cooked eggs into cubes and gently stir into the spice mixture. Add the black pepper (several generous grinds actually work well for this purpose). Garnish with the cilantro.

From The Bengali Five Spice Chronicles by Rinku Bhattacharya

Heat the mustard oil in a wok or skillet on medium heat for about 1 minute. Add the nigella seeds and wait till they sizzle and then add the ginger and cook for about 30 seconds. Add the green chilies, tomatoes, salt, and sugar and mix well. Let this cook for about 2 minutes. Squeeze in the lime juice and simmer for another minute (This relish should be cooked just enough to dissolve the salt and sugar and allow the flavors to meld together.)

Mix in the peanuts and mint and cook for about 30 seconds. Turn off the heat and stir in the bhaja masala and let the relish rest for about 1 minute. This relish keeps for about 3 weeks when stored in an airtight jar in the refrigerator.