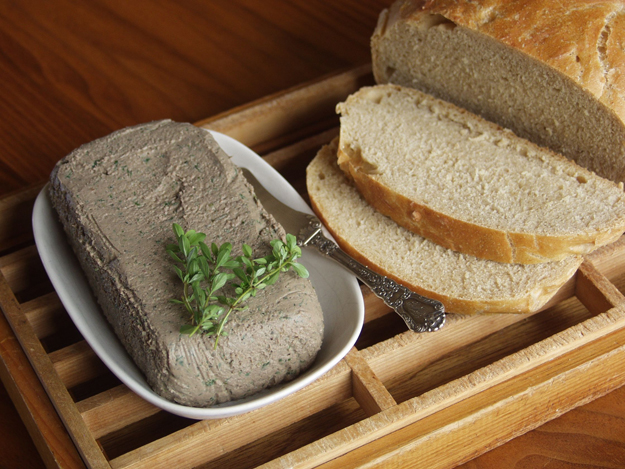 When putting together recipes for a cookbook about a country’s cuisine the big question is, do you want it to be mainly accurate or appetizing? As I am reviewing the recipes in Spoonfuls of Germany I realize taste is what matters to me most. And taste, of course, is personal. I accept the fact that there will always be someone complaining this dish or that dish is missing from the book.

On that note, Schlesisches Himmelreich, a specialty from Silesia that literally means “Kingdom of Heaven”, is going out the door in the next edition. When I originally made it, my husband sat a bit perplexed in front of the heap of stewed dried fruit with pork that is served with potato dumplings. Is this a main course or a dessert, he asked. The dish might be appreciated more because of its nostalgic value than for its taste – Silesia, which was conquered by Prussia in 1742, belongs to Poland since the Second World War, and the ethnic German population was forced to leave. Surprisingly Amanda Hesser included the recipe in The Essential New York Times Cookbook but also calls it “one of the strangest recipes in the book” and “an outlandier recipe”. I found that reassuring.

Likewise, Saumagen (Stuffed Pork Stomach), a dish from Palatinate that acquired international fame as the favorite dish of the former German chancellor Helmut Kohl, is off limits. There are newer chef’s creations for make-believe Saumagen with marzipan and sweetmeat stuffing. Not for me. I want the recipes in my book to be appetizing yet authentic. Besides there are many other great recipes from Palatinate, where October is high season for chestnuts. I still have not made up my mind which chestnut dessert I want to include (in the process I found my favorite way for peeling chestnuts, see below).

Generally I do not like offal meats but there are exceptions. I have always appreciated a good pâté so I thought I give a recipe from Hessia a try. It is called Falscher Schnepfendreck which means “Fake snipe (bird) droppings”. Don’t be fooled by the name of a dish. Schlesisches Himmelreich in my taste is truly not heavenly. The “fake bird droppings” are. I will have another slice of it for lunch and then sit down to write down the recipe. 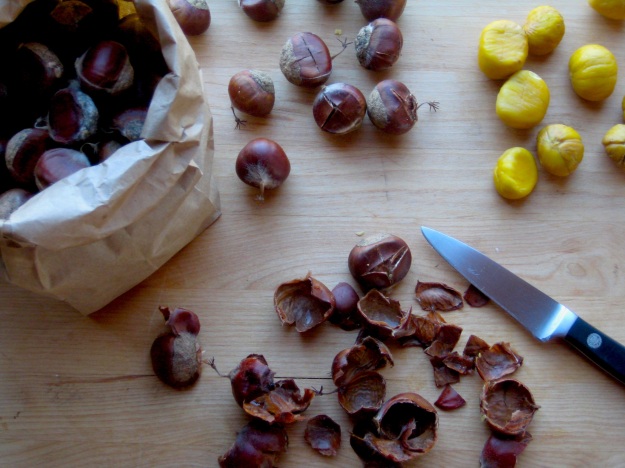 Unless chestnuts are to be eaten hot from the oven as a snack, I found that roasting them in the oven dries them out too much. I prefer boiling them briefly and then steaming them. The chestnuts can always be sautéed in butter or oil afterwards to give them a nice golden brown color.

1. Cut a 1-inch crisscross into the each chestnut using a serrated knife.

2. Put the chestnuts in a saucepan and cover with water. Bring to a boil and cook for 3 minutes. Remove from the heat.

3. Let cool slightly. Leave the chestnuts in the hot water and take them out one by one to peel. The peel and the brown skin underneath are much easier to remove when the chestnuts that way.

3.  Freeze the peeled chestnuts or store in the refrigerator in an airtight container and use within a few days.